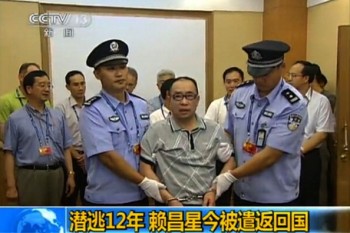 This TV grab, taken on July 23, 2011 from China's Central Television, shows fugitive Chinese businessman Lai Changxing escorted by Chinese authorities after he landed in Beijing aboard a civilian flight in the custody of Canadian police. (STR/AFP/Getty Images)
China

Lai Changxing, the Chinese fugitive who is accused of masterminding a multibillion-dollar smuggling ring, was deported from Canada to Beijing and arrested by Chinese police.

The state-run Xinhua news agency said that Lai arrived in Beijing on Saturday afternoon and was immediately arrested at the airport.

Lai had applied to the Canadian government for the suspension of the deportation, but his plea was denied by a Canadian court.

Lai was escorted by two Canadian police and boarded a civilian flight from Vancouver to Beijing on July 22. Lai entered the airport through a special entrance and boarded earlier than other passengers; he seemed calm during the flight and occasionally chatted with policemen, according to a report by BBC .

According to a report by the Chinese-language news website dwnews.com , which is based outside of China, passengers on the business class of Air Canada flight AC29 said that Lai was escorted by at least two Canadian policemen. A white curtain separated Lai from the other passengers and passengers did not know ahead of time that they would be flying with Lai aboard.

Upon arrival at the Beijing Capital International Airport, Lai was escorted off the plane by the two policemen, who were soon joined by another five or six Chinese policemen.

Lai had to pay for his plane ticket from Vancouver to Beijing, which cost around 1,500 Canadian dollars (US$1,599) in the current summer season, according to the BBC.

The case in China against Lai involved smuggling of around 50 billion yuan (US$7.76 billion) in goods and a tax evasion charge of 30 billion yuan (US$4.65 billion). It is said to be the largest case of economic crime since the establishment of the Chinese communist regime in 1949. It is also a case that involves hundreds of regime officials, making Lai’s return a “sensitive” matter.

In 2000, Lai Changxing arrived in Canada using his Hong Kong passport and began his 12 long years of applying for refugee status. However, Lai was ultimately deported back to China, with his status as a permanent resident of Hong Kong revoked.