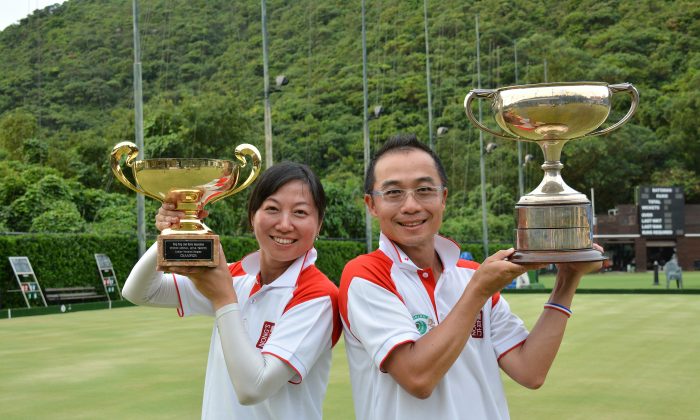 Lai, who defeated CY Yu from Filipino Club in the 2011 final, met Yu again at the semi-finals stage in the morning of Finals Day. History repeated itself and Lai prevailed 21:8 to proceed to the final.

On the adjacent rink, Raymond Ho defeated Chadwick Chen from Kowloon Cricket Club 21:17 in a close competitive match to proceed to his second National Singles final.

The final was a tight affair when both players displayed a high level of skill. They evened out each other on the score and were tied on the 5th, 8th and 12th ends.

Ho then displayed a series of fine performances and took five consecutive ends opening up a gap of 16:9.

“Despite me drawing consistently, Ho played really well during this period so I knew it was time for me to change the tactics a bit,” said Lai.

Lai took one shot from the following end and changed the playing distance to a medium short length. Lai adjusted well to the new distance and took a four points in the next end.

Misfortune also started to rest on Ho and this is best illustrated in the 20th end when he was still leading 16:15. Lai was holding a shot and Ho tried to trial the jack to win four shots. Ho took the jack with an accurate shot, but the jack was somehow moved slightly towards Lai’s bowl and gifted Lai two shots in this end.

Ho never recovered and Lai took 12 shots from the last seven ends to finish the game 21:16.

Lai attributes the victory to his consistency: “When I was on the receiving end I just focused on cutting down the loss, by this I keep the scoreline tight and put the pressure on Ho. When my luck was back I took the opportunity to maximise it.”

Ho felt that his performance is OK throughout, but he was unlucky in the last few ends: “This is particularly important when you need to take some risky shots but today is clearly not my day.”

Cormack, who came back from 20:9 to beat another Hong Kong International Mercredi Yeung 20:21 in the semi-finals, displayed the same kind of spirit in the final. She was trailing Yu 19:11 and started her come-back push. She took five shots in three ends to close the gap to three shots.

Yu believes her victory resulted from a stable performance during the game: “It has been quite a long day. I am a bit tired and had a headache towards the end. But I maintained my concentration and focused on improving my drawing. I am glad that it worked out well.”

The National Singles this year has generated a lot of interest in the bowling community as this is the first time that a sponsor was secured. The event was sponsored by Nong’s Company, one of the main suppliers of concentrated Chinese medicine granules in Hong Kong and an unprecedented prize of HK$10,000 (US$1,200) was awarded to each winner. A record breaking 266 men and 155 women bowlers entered the competition.