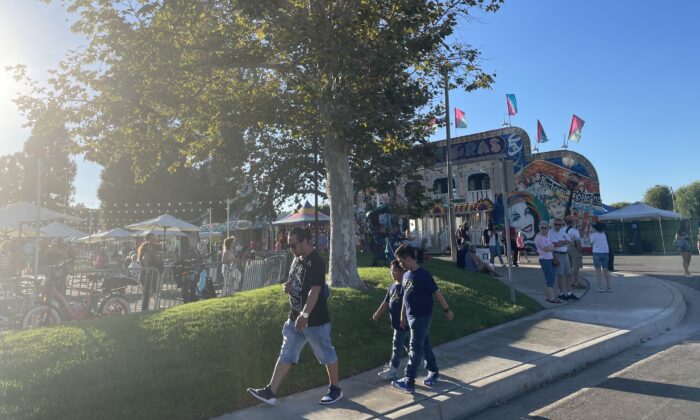 Beginning Aug. 26, the city opened with all the traditional carnival fare and rides at Dorine and El Lazo streets, with scores of attractions for visitors to enjoy starting right at the festival’s entrance.

The band, consisting of members 17 or 18 years old, boasts a large following on all streaming platforms and has already performed at the Orange County Fair twice after competing against over 900 other bands at audition, according to the band’s manager.

Just up the road, smells of funnel cake and sizzling local fare wafted down the walkway. Families and their young children hopped onto the bright purple “Tilt-a-Whirl,” while others screamed and laughed on the infamous “Zipper” ride known for its rapidly spinning, upside-down carriages. Behind the sparkling Ferris wheel were local political groups and candidates greeting visitors.

Hosted by “Taste of Laguna Niguel,” the festival’s dining spot features a large spread of local fare, including savory Indian cuisine from Rangeen Indi-Cali Kitchen, cheesy pizza and sandwiches from Fresh Brothers, and many others along with a host of specialty food trucks.

The festival’s beer and wine garden also invited attendees wishing to relax under the twinkling lights. Overlooking the Ferris wheel and other classic rides, patrons enjoyed local spirits and treats from the “Sugar Shack,” notably their golden fried oreos.

With a plethora of activities, including free camouflage face paintings by the city’s Military Support Committee, thousands are projected to attend the three-day fair through Sunday.