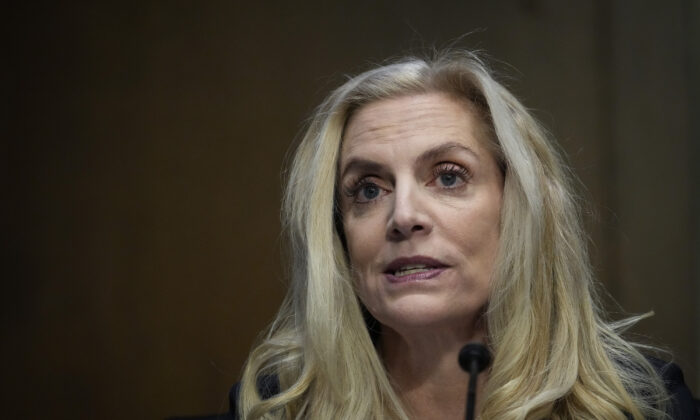 In the Federal Reserve’s quest to fight inflation, the central bank could overtighten and create more risks for the U.S. economy, Fed Vice Chair Lael Brainard has warned.

Brainard said the institution is committed to reining in the near-40-year-high inflation that is hurting millions of low-income Americans, she said at the Clearing House and Bank Policy Institute 2022 Annual Conference in New York on Sept. 7.

That will require more interest rate increases as well as keeping the fed funds rate higher for longer, she noted.

Brainard warned that the accelerated pace of rate increases could “create risks associated with overtightening,” a comment that triggered an exceptional rally among the leading benchmark indexes.

“At some point in the tightening cycle, the risks will become more two-sided,” she said in her prepared remarks. “The rapidity of the tightening cycle and its global nature, as well as the uncertainty around the pace at which the effects of tighter financial conditions are working their way through aggregate demand, create risks associated with overtightening.”

However, it’s still crucial to “avoid the risk of pulling back too soon,” she added. While the Fed doesn’t maintain control over the supply side of the equation, the central bank can act appropriately to anchor inflation expectations and manufacture price stability.

“We are in this for as long as it takes to get inflation down,” said said.

After the text of her speech was released, the U.S. stock market surged.

Inflation May Not Have Peaked

The rising cost of rent might suggest that price inflation has yet to peak, according to Cleveland Fed Bank President Loretta Mester.

“I’m not even convinced that inflation’s peaked yet,” Mester told Market News International in a webcast on Sept. 7. “That tends to be much more persistent and rents are still very elevated and it takes a while for rents to show up in underlying inflation.

“There’s still more that’s going to show up on that side. I haven’t seen much in the way of suggesting that’s starting to come back down.”

Mester also noted that she anticipates the U.S. economy to experience slower growth this year and in 2023, as financial conditions tighten further.

While the first half of 2022 endured negative gross domestic product (GDP) growth, she believes the economy will return to positive but tepid growth in the second half.

“But for this year as a whole and for next year, I expect growth to run well below 2 percent, which is my estimate of trend growth,” Mester stated, adding that she isn’t penciling in a recession just yet.

Looking ahead to this month’s much-anticipated Federal Open Market Committee (FOMC) policy meeting, Mester stopped short of whether she supports a 75-basis-point rate move. She thinks that will depend on the inflation outlook.

“The size of rate increases at any particular FOMC meeting and the peak fed-funds rate will depend on the inflation outlook, which depends on the assessment of how rapidly aggregate demand and supply are coming back into better balance and price pressures are being reduced,” she said.

According to the CME FedWatch Tool, most of the market is forecasting a three-quarter-point increase. This would lift the benchmark rate to a range of 3 to 3.25 percent.

Too Little, Too Late?

While Fed Chair Jerome Powell revealed that the central bank would stop giving guidance, the institution’s officials keep conveying to the financial markets that there’s a need for higher rates to combat inflation.

But this is “too little too late,” says Nancy Tengler, CEO and chief investment officer of Laffer Tengler Investments.

“Even when it was clear inflation was sticky and persistent, the Fed continued accommodative policy through March of this year,” she wrote in a note. “The drumbeat of Fed officials giving guidance, reiterating calls for higher rates seems to be more of the same—too little, too late.”

At the same time, there might be evidence that inflation has peaked, although she asserted that how energy prices perform this fall could be the best indicator.

So, can the Fed trim price inflation without crushing the economy?

A growing chorus of economists anticipates a painful recession in 2023 as higher rates seep into the economy.

“We’re going to have one whopper of a recession in 2023,” said Steve Hanke, a professor of applied economics at Johns Hopkins University, in a recent interview with CNBC.

However, Jan Hatzius, Goldman Sachs’ chief economist, explained in a note that navigating the nation to a soft landing is still possible. He cited “below-trend” growth, a significant decline in inflation, and a “rebalancing of the labor market.”

Despite what happens in the broader economy, Boston Fed Bank President Susan Collins stated to the Six Hundred Atlantic podcast that lowering inflation to the 2 percent target rate is the central bank’s primary job.