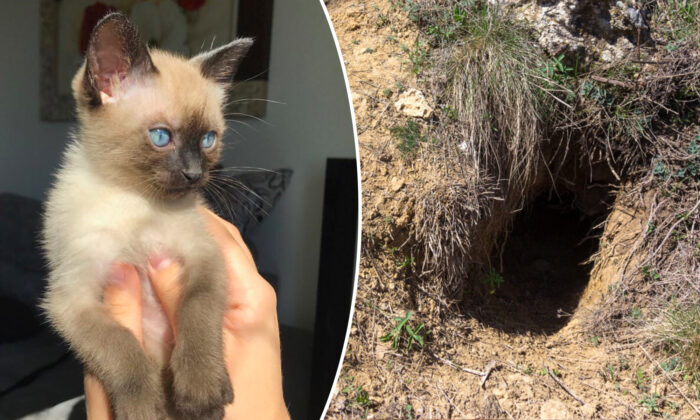 When life dealt this kitten a mighty blow and mama did not return to her newborn babies, all this little one could do was hold on and hope that someone would discover him. Luckily, a kindhearted woman came to his rescue.

Claudia Branco, of São Paulo, Brazil, heard faint cries of distress coming from outdoors. She carefully followed the sound to a hole in the ground.

When she looked down into the hole, she was surprised to find three newborn kittens. They were not even one day old.

Two of the three kittens were not moving; sadly, they had died. The felines’ mother was nowhere to be seen.

“The mama cat was not around, and never came back,” Monica Varriano, a friend of Claudia’s, told Love Meow.

The only surviving kitten was near death. With his eyes closed, the kitten was huddling next to his siblings, clinging on to his life.

Claudia knew she had to save the kitten. She and her family took the feline to the vet and found that it was a boy, so she named him Fred.

It was practically a sleepless first night for Claudia—she kept watch over the tiny and fragile Fred, feeding him frequently in regular intervals, around the clock, making sure that he was still breathing.

Her whole family got involved in caring tenderly for little Fred. They took turns feeding him, keeping him warm, and doting on him to no end.

Fred had a strong will to live. He refused to give up. After many a sleepless night with Fred’s life hanging by a thread, the lucky kitten survived against all odds and suddenly made a breakthrough.

One bright morning, the family were woken by the fully recovered rambunctious, cute blue-eyed kitten, who looked like he had many a mischievous trick up his sleeve… The family couldn’t believe he was the sick kitten that Claudia found in that hole.

Having been nursed back to health, Fred began exploring his surroundings and being just totally magical. Fred’s purring was just too adorable for words. He had a big love for Claudia, the hero who saved his life, and followed her around the house.

Fred is now Claudia’s instant cuddle therapist and makes sure that she doesn’t get internet overload and gets a break from her laptop. The feline loves snuggling up to Claudia. He was seen cuddling with Claudia while she played the music.

One year after the rescue, a jolly tea party with special cake was held to celebrate a major milestone—the feline fighter has turned one year old. On his birthday, Fred donned a party hat, and he had his own cake to savor every bite!

Fred has grown to become a beautiful cat with his soft darkish fur and blue eyes. We are glad Claudia heard his cries and managed to rescue this cute kitten! Fred did not have a mom; he has found hope in life with his human owner and even has a new brother.