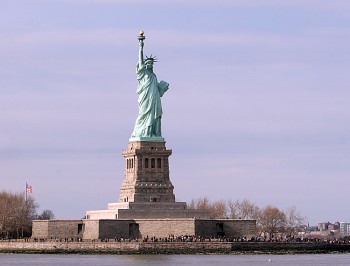 LADY LIBERTY: The Statue of Liberty is seen on Liberty Island. The statue is nearing its 125th anniversary, from when it was given to the United States on Oct. 28, 1886. (Tim McDevitt/The Epoch Times)
US

Lady Liberty and All She Represents

Amelia Pang
Journalist
Amelia Pang is a New York-based, award-winning journalist. She covers local news and specializes in long-form, narrative writing. She holds a Bachelor’s degree in journalism and global studies from the New School. Subscribe to her newsletter: http://tinyletter.com/ameliapang
View profile
Follow
biggersmaller
Print
NEW YORK—The Statue of Liberty was conceptualized in 1865 by Edouard de Laboulaye, French poet and abolitionist. Inspired by the American Revolution, his gift represented his wish for democracy in France. Nearing its 125th anniversary, Liberty Enlightening the World, the official name for the statue, still stands strong as an international icon of freedom.

The ideals the statue was meant to represent still hold strong for many Americans. To protect the future of the land of opportunity, Sgt. Tashane Vann chose to re-enlist at the Statue of Liberty in 2010.

“I joined the Army after 9/11. I used to work at the American Express located in the World Trade Center. … I was in the city when all of the madness transpired. Ever since then, I have felt obligated to help bring down those who terrorized my hometown,” said Tashane Vann in an online interview.

Vann is currently deployed in Afghanistan, and has nine more months to go before returning home.

Throughout history, the statue has also represented an immigrant’s transition into an American life, into a new beginning, into freedom.

She is built from 31 tons (62,000 pounds) of copper, which includes 300,000 copper rivets, an index finger of eight feet, and some 80 tons of copper sheet, which naturally oxidized to give the Statue of Liberty its nice green patina.

A massive iron pylon and secondary skeletal framework allows the statue to have the flexibility of swaying in violent harbor winds while standing upright.

Sculptor Frederic-Auguste Bartholdi, creator of the Statue of Liberty, was inspired by the grandiosity of the Pyramids and the Sphinx during a visit to Egypt, which he incorporated into the Statue of Liberty. Combining the Greco-Roman style with the large-scale measurements of Egyptian wonders, the symbol of democracy was born.

In line with what Victor Hugo, author of “Les Misérables” said on May 13, 1885, "To the sculptor form is everything and is nothing. It is nothing without the spirit—with the idea it is everything.”

When the Germans annexed the entire Alsace region of France, the idea of liberty took on a poignant meaning for Bartholdi, who stated "I will try to glorify the republic and liberty over there [USA], in the hope that someday I will find it again here.”

The theme of this contest is "Honor History, Envision the Future." Ten logos have been selected from artwork by communication design students of New Jersey City University, leaving the public to vote for the best in October.