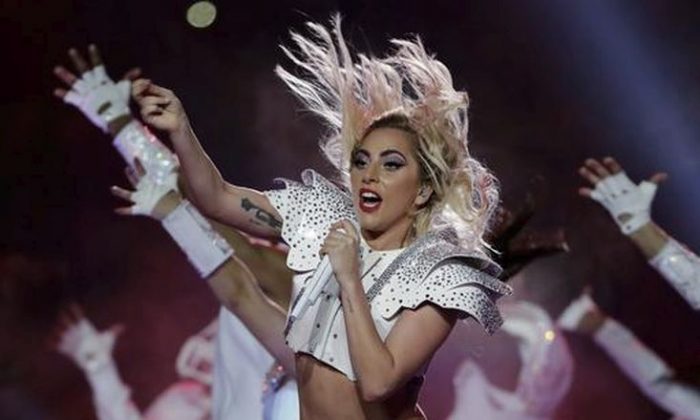 Singer Lady Gaga performs during the halftime show of the NFL Super Bowl 51 football game between the New England Patriots and the Atlanta Falcons in Houston on Feb. 5, 2017. (AP Photo/Matt Slocum)
US

Lady Gaga dropped from the top of Houston’s NRG Stadium to open her halftime show and dropped the mic at the end, offering a program that delivered high-energy hits and an inclusive theme.

With the nation on edge politically, the NFL had little taste for a show that would ruffle feathers, as Beyonce did in some circles last year with the Black Power messaging of “Formation.” Gaga plainly listened.

She was patriotic from the start, opening with snippets of “God Bless America” and “This Land is Your Land” with red and blue lights twinkling above her, before guide wires delivered her to the stage below.

Once onstage, she commanded a large troupe of dancers and musicians, props that breathed fire and audience members swinging lights in synchronization—the usual excess that has become a Super Bowl cliche.