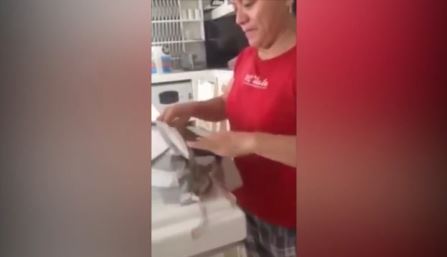 A screenshot of the video of Lady Chiles.
Americas

Adriana Rodriguez, infamously known as Lady Chiles for recording her domestic employee, has responded to attacks leveled against her on Twitter, Facebook, and other social networks.

She said in the initial video that she offered one of the chiles to her employee and was going to give the second one to a friend. “It is impossible for someone to eat two whole chiles on their own,” she kept saying in the video.

“She gets well treated in this house, gets paid good money every week, gets vacation days and a bonus for Christmas,” added the housewife.

“She doesn’t work extra hours, she just comes to work, eats breakfast and lunch like everyone in my family: cereal, salads, fruit, pasta, etc.

“The other misconception is that Nieves’ son is a little kid when in reality he’s a 20-year-old, owns a car and has a job,” she added, noting that Nieves “was not stealing because she was hungry… it’s not like she was stealing basic foods.”

Hilda Téllez, director of Conapred (an organization for discrimination prevention) told media outlets that Rodriguez should apologize and also compensate the employee somehow.