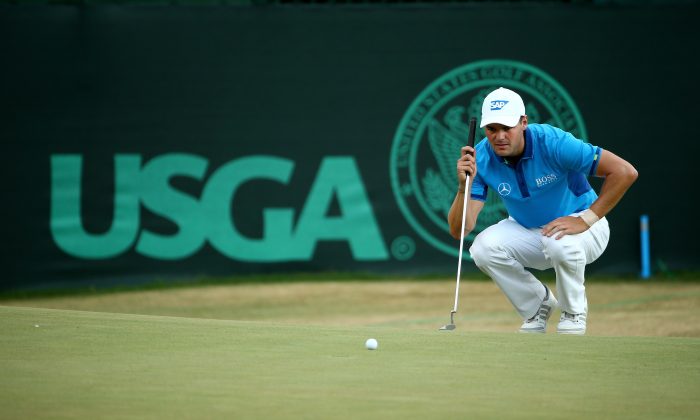 Martin Kaymer of Germany waits on the 14th green during the first round of the 114th U.S. Open at Pinehurst Resort & Country Club, Course No. 2 on June 12, 2014 in Pinehurst, North Carolina. (Streeter Lecka/Getty Images)
Golf

Ladies First Right? Not at this year’s US Open!

A lady approaches a door and a man alongside her instinctively opens it for her to enter first. Nothing extraordinary but clearly respectful. Extending various courtesies to women — is something civilized men have been doing for centuries.

This year’s U.S. Opens at Pinehurst in the sand hills of North Carolina has taken that order and reversed it — much to the chagrin of a number of female competitors. For those not in the know this year’s Men’s and Women’s Open Golf Championships — both conducted annually by the United States Golf Association (USGA) — will be held at the same facility and staged in consecutive weeks from June 12-15 and then the following week June 19-22. Such a staging has never been previously.

The process is a simple one — the men go first — the women follow. The reaction has not been uniformly praised.
USGA Executive Director Mike Davis has repeatedly stated the order was based simply because it would be easier to soften the putting surfaces following the men rather than firming them up if the order was reversed. Unlike the men — the women hit the ball lower and with less overall spin. Applying water to the greens in order to have them more receptive to approach shots — is easier than attempting to dry them out. The concern from the USGA is if the men follow the women the putting surfaces may be too receptive by virtue of the overall moisture content.
“They should have played the ladies first,” Golf Channel commentator Frank Nobilo said. “Less traffic, they could prepare the golf course, but I guess they (USGA) figured the men deserve a tougher challenge, they want better fairways, maybe they have a different set of hole locations. That the thing, too, is you’ve got to find eight hole location, otherwise those area are going to get punished as well. It’s interesting how they’re going to cope with it.”
Initially, when the back-to-back event idea was contemplated by David Fay — the immediate past USGA Executive Director – the impetus was to save dollars given the history of losing money when the Women’s Open is played. That fear has abated greatly with a new television deal agreed to by the USGA and Fox Sports starting in 2015.
Fay was also quite proactive in securing the support of LPGA Commissioner Mike Whan first to the overall concept and then in further agreeing not to have a 72-hole LPGA Tournament follow the Women’s event in Pinehurst. Why? Fay realized if poor weather impacted the men’s event the spillover to the women would likely cause an extension into the following week thereby impacting the flow of the Women’s Open and the LPGA event in Arkansas which commences on June 27.
One element that the USGA has always been steadfast in not changing is the settlement of any ties for its various Opens — men’s, women’s and senior men respectively. All are finalized through an 18-hole playoff the next day after 72-holes are completed. Should a tie remain after the additional round the resolution is achieved via a sudden-death playoff. Among golf’s four major championships only the USGA holds to an 18-hole playoff.
In regards to access to Pinehurst #2 — the USGA has stated if the men have a playoff the women could actually begin practice rounds on that same Monday — either playing before or after the men’s playoff. Hard to envision women playing the course when the men’s title is still being contested. How have the world’s top men players reacted? The USGA is not saying and the top male players have not commented publicly — yet.
Stacy Lewis — the top ranked American player and ranked #2 in the world has stated that most women professionals would have preferred going first.
Nonetheless, after a professional men’s event the wear and tear from their presence and the accompanying foot traffic of spectators can mean spillover issues for the women to handle — namely divots and green usage with certain hole locations. If the weather turns especially poor — the resulting mud areas can be a bit disconcerting — witness the downpours that impacted the ’09 Men’s Open at Bethpage Black.
The women have also raised rightly the proliferation of divots caused by the men. The USGA has stated that appropriate movement of tees will likely render this concern to only a few holes of note. And, the USGA further adds, playing out of divots is part and parcel of the challenge of the game — whether the men or women actually played first.
Clearly, at minimum — the resulting discussion of the order of play has raised the awareness level of golf fans. Will that translate into ratings? That remains to be seen.
M. James Ward, a member of Golf Writer’s Association of America (GWAA) and past member of Met Golf Writer’s Association (MGWA), has reported on golf’s grandest events since 1980 in a variety of forums.
Share this article
FacebookFlipboardTweetRedditEmail
Show Discussion
RECOMMENDED
TOP VIDEOS
TOP NEWS