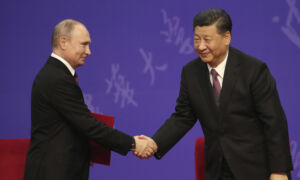 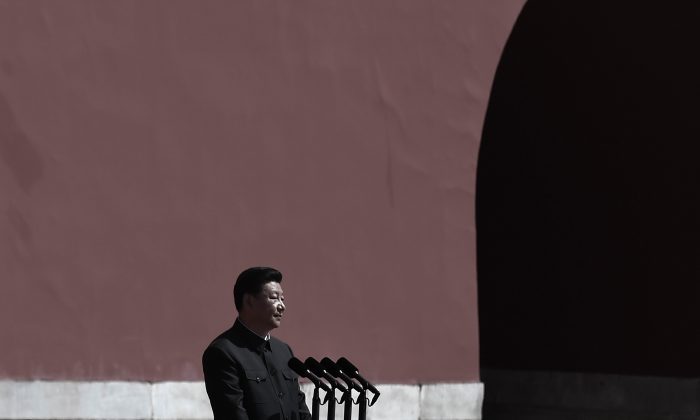 Chinese President Xi Jinping (C) prepares to review the People's Liberation Army (PLA) troops from a car during a military parade to mark the 70th anniversary of the end of World War Two, in Beijing on Sept. 3, 2015. (Wang Zhao/Pool/Getty Images)
Analysis

The Chinese Communist Party (CCP) recently announced that there will be no military parade for the CCP’s centennial celebration on July 1 this year, despite regime leader Xi Jinping having held five military parades since he took office.

On March 23, Wang Xiaofei, deputy minister of the Publicity Department of the CCP, announced the arrangements for the celebration of the 100th anniversary of the founding of the CCP, which includes eight activities such as celebration rallies and education on the CCP’s history. However, the activities did not include a military parade.

Afterward, Li Jun, assistant director of the Political Work Department of the CCP’s Central Military Commission (CMC), also clearly stated that no military parade was scheduled for the event.

On Feb. 1, Xi said explicitly at a symposium for non-CCP personages that he would celebrate the 100th anniversary of the founding of the CCP in a momentous way. It was widely believed that there would be a military parade at the anniversary, because a military parade is an event that carries the highest military honor.

Therefore, when the CCP officially announced that there would be no military parade for the celebration, it drew international attention.

Xi has been forced to cancel the military parade, which is a sign of him showing a white flag, according to U.S.-based China expert and current affairs commentator Li Yanming. There are three reasons for this.

First, the CCP is in a tense military confrontation with its neighboring countries and regions. Additionally, it has been in a passive situation after the high-level Alaska talks with the United States. The CCP is worried that the military parade will irritate the United States and other Western countries.

U.S. Secretary of Defense Lloyd Austin visited Japan, South Korea, India, and other countries not long ago, openly releasing signals to unite allies and contain the CCP. The CCP is also facing pressing and difficult issues in the Taiwan Strait, the South China Sea, the Diaoyu Islands (or Senkaku Islands, as Japan calls them), and the Korean Peninsula. If the CCP holds a military parade again, it is bound to anger the United States and its allies.

Secondly, the military parade may aggravate the spread of the pandemic in the CCP’s military. The CCP virus has been ravaging the world for more than a year now, and the Chinese regime has been trying to cover up the pandemic in China, and the true picture of its military epidemic is highly classified. A large-scale military parade will undoubtedly aggravate the risk of the spread of the virus within the military. Against the backdrop of an escalating military crisis, the Chinese regime dare not and cannot afford this major risk.

Thirdly, the military parade will be a political risk for Xi, as internal political struggles in the CCP escalate among its top echelons. Next year is the 20th National Congress of the CCP, and the internal struggle among its top factions is greater than ever before. Against the above background of internal and external difficulties, Xi’s military parade would not only face uncontrollable diplomatic and military risks, but would also provide his political enemies with opportunities to make trouble or even a coup d’état, which would directly threaten Xi’s reelection and senior personnel layout.

Last December, sources close to Beijing’s top brass told The Epoch Times that Xi Jinping had deviated from Deng Xiaoping’s policy of hiding China’s capabilities and biding time, and had been overly ambitious, prematurely revealing the CCP’s ambition to rule the world, attracting strong resistance and sanctions from the United States. As a result, Xi was severely criticized within the CCP, and some senior early-generation leaders even asked him to step down.

Jin Chanrong, director of the National Academy of Development and Strategy at Renmin University, known as Xi’s top counselor, publicly disclosed Xi’s ambitions and conspiracies for hegemony over the United States back in 2016.

In July 2016, Jin gave a lecture titled “Sino-U.S. Strategic Philosophy” at the Southern Club Hotel in Guangzhou. In the lecture, he said that Xi Jinping’s goal is very clear, and that “it is national rejuvenation … Now that surpassing Britain has been realized, what is left for us is to catch up with the United States.”

“I believe that for General Secretary Xi, national rejuvenation means to surpass Britain and catch up with the United States,” Jin said.

In recent years, Xi has repeatedly talked about “building a community with a shared future for mankind” and “global governance system,” which are expressions found in official CCP propaganda reports. Xi declared at the recently concluded CCP’s two sessions that the Chinese regime now can “view the world head up.” These remarks resonate with Jin’s words above.