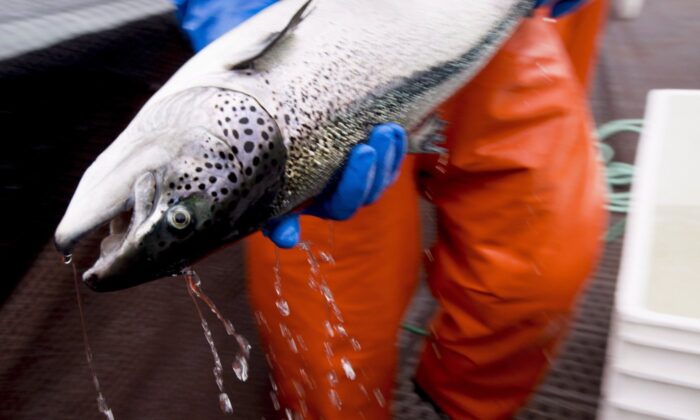 An Atlantic salmon is seen during a Department of Fisheries and Oceans fish health audit near Campbell River, B.C. Oct. 31, 2018. (The Canadian Press/Jonathan Hayward)
Canada

A Federal Court judge has set aside a Department of Fisheries order that would have phased out fish farming in British Columbia’s Discovery Islands.

Federal Court Judge Elizabeth Heneghan says in a decision issued April 22 that the order made in late 2020 by then-fisheries minister Bernadette Jordan breached the right to procedural fairness owed to the 19 fish farms expected to shut down by the end of June.

Fish farm operators Mowi Canada West, Cermaq Canada and Grieg Seafood applied for a judicial review of the order that prevented them from restocking their farms, arguing it lacked reasons and didn’t “show an appreciation of the facts.”

Heneghan agreed, saying without reasons from the minister the order can’t be justified, nor is it transparent or intelligible.

Heneghan’s ruling supports the fish farm operators’ request for judicial review, upholds the injunction that permits restocking of Discovery Island fish farms and sets aside the decision of the minister while a ruling on costs will follow.

The Fisheries Department and minister Joyce Murray did not immediately respond to a request for comment.

Heneghan’s decision also says submissions of interveners, including the David Suzuki Foundation and Georgia Strait Alliance, focused on issues including constitutional protection of First Nations’ rights and respect for the precautionary principle but didn’t address questions such as the lack of procedural fairness.

Mowi argued last year that it would suffer losses of about $26 million and be forced to lay off at least 78 people and cancel local contracts if it was forced to cull 1.18 million salmon smolts instead of transferring them to the Discovery Island farms.