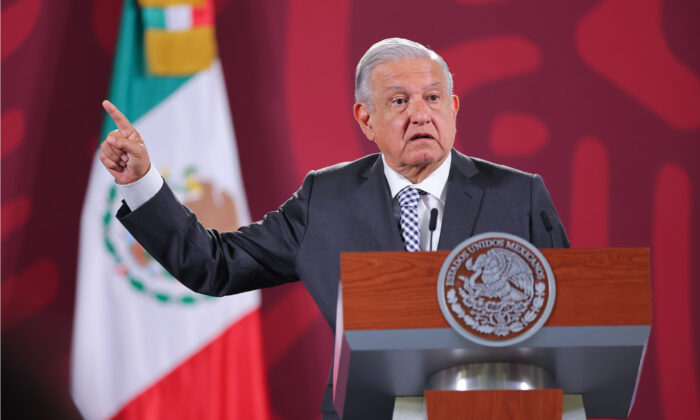 ‘Lack of Controls’ in US Border Contributes to Horrible Migrant Deaths: Mexican President

The devastating situation in the migrants’ home countries and the status of the U.S.-Mexico border were to be blamed for the tragic incident that happened in San Antonio, Texas, Mexican President Andrés Manuel López Obrador said Tuesday.

At least 50 migrants died after being stuck inside a sweltering semi-trailer in San Antonio in one of the deadliest human trafficking incidents in recent history, U.S. and Mexican officials said on Tuesday.

The illegal immigrants were discovered dead inside the truck’s trailer on the outskirts of the Texas city on Monday, where temperatures swelled to a high of 103 Fahrenheit.

Some 22 Mexicans, seven Guatemalans, and two Hondurans were identified among the dead, Mexico Foreign Minister Marcelo Ebrard said on Twitter on Tuesday. There was no information on the nationality of the other 19, Mexican officials said.

More than a dozen people were transported to hospitals for heat stroke and exhaustion, including four minors, but no children were among the dead, the San Antonio Fire Department said.

‘These Deaths Are on Biden’

The Mexican president offered condolences to the relatives of this catastrophe and said poverty in the migrants’ home countries and the situation on the U.S.-Mexico border contributed to the tragedy.

“These unfortunate events that of course have to do with the situation of desperate poverty of our Central American brothers, and of Mexicans,” he said during his daily briefing. “[It] happens because there is also human trafficking and lack of controls, in this case, on the border with the United States and inside the United States.”

Abbott criticized President Joe Biden’s border policies vehemently and said the deaths of the migrants are the result of Biden’s policies.

“These deaths are on Biden. They are a result of his deadly open border policies. They show the deadly consequences of his refusal to enforce the law,” he wrote in a social media post.

However, the White House insisted that the border is “closed” and blame the human traffickers.

“This incident underscores the need to go after the multi-billion dollar criminal smuggling industry preying on migrants and leading to far too many innocent deaths,” Biden said in a statement on Tuesday. “My administration will continue to do everything possible to stop human smugglers and traffickers from taking advantage of people who are seeking to enter the United States between ports of entry.”

“The fact of the matter is the border is closed,” she stated in response to a question about the migrant deaths.

Enrico Trigoso and Reuters contributed to this report.