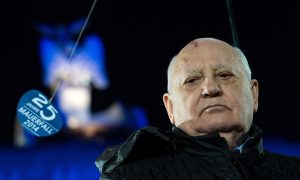 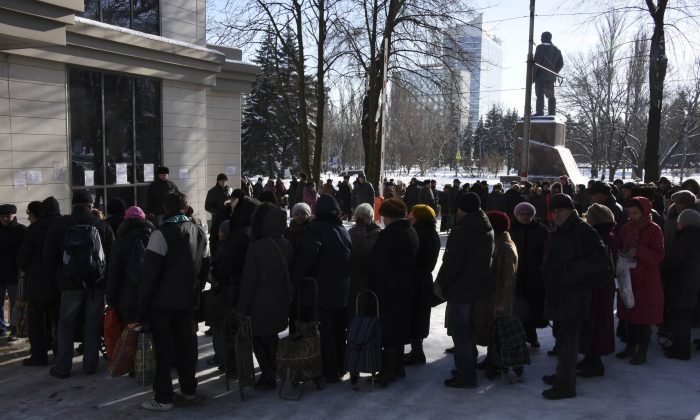 People queue to receive humanitarian aid from the charitable foundation of Ukrainian billionaire Rinat Akhmetov, whose vast wealth is founded on the industrial output of Donetsk coal-rich region, in Donetsk, Eastern Ukraine, Tuesday, Jan. 13, 2015. Akhmetov is contentious figure in eastern Ukraine. Although a major provider of employment, he is regarded with profound suspicion by much of the impoverished local population. Still, his standing improves with every consignment of goods that reaches separatist-held regions. Amnesty International said it received reports before the New Year holidays of volunteer battalions fighting alongside Ukrainian government forces of preventing the Akhmetov convoys from getting through. The battalion justified their actions by arguing that the food and clothes in the trucks could ultimately help to support the separatist cause, Amnesty says. (AP Photo/ Mstyslav Chernov)
Europe

DONETSK, Ukraine—Valentina Dudareva’s voice cracks with despair as she stands in the snow, surveying the bombed-out windows of her apartment block in Donetsk, the separatist capital in eastern Ukraine.

Cold, poor and hungry, Dudareva is among the masses of people trapped by fighting between the government and Russian-backed militias, reliant on outside help that often fails to arrive. More than six months have passed since Dudareva last received her pension — and the Russian food aid packages so trumpeted by rebel authorities are nowhere to be seen.

Anger she once reserved for the Ukrainian armed forces shelling the city is now directed at the separatist government.

“They tell us: ‘Go to the theater. There are tickets for sale!'” Dudareva said, dabbing a handkerchief to her cheek. “But I want to eat. I want my pension.”

The U.N.’s Office for the Coordination of Humanitarian Affairs has been sounding the alarm over a daily worsening crisis across the region, where fighting has raged since April.

“Thousands of people are highly vulnerable and in need of assistance,” the OCHA said last week. “Along with financial problems, many lack the ability to buy essential food and medicines and are living in frigid winter conditions.”

Help is thin on the ground, although it is often promised.

Since the summer, Russia has dispatched 11 columns of large white aid trucks with food and other basic supplies. The latest arrived in Donetsk one week after New Year’s, carrying tinned goods, building material and — too late for Christmas — festive fir trees.

Despite the urgency of the crisis, the Donetsk headquarters of the Recovery Coordination Center are largely deserted. A spokesman for the center sits in a sparse office with a bare desk, no computer in sight.

Ukrainian authorities accuse Moscow of using the convoys for ulterior purposes — possibly to transport military equipment to the separatist fighters. There is no firm evidence of that, but the graver suspicion among many in Ukraine’s conflict-hit Donetsk and Luhansk regions is that goods intended for the needy are being diverted to the black market to line the pockets of separatist officials.

In late December, disgruntled militia commander Pavel Dremov produced a video in which he accused the leader of the self-styled Luhansk People’s Republic of pilfering Russian aid.

“Out of 10 humanitarian convoys, only one has reached the people. Everything else has been stolen,” Dremov said, standing next to fellow Cossack fighters in green military fatigues. “Is this what our people have died for?”

Those sentiments are frequently echoed by civilians in private, but they are too afraid to openly express criticism in a largely lawless region.

In Donetsk, many bitterly complain that they have tried to officially apply for support, only to be rebuffed.

“We sent in applications … but we haven’t received a thing for eight months,” said Pyotr Avdeev, whose home has been obliterated by shelling. “Nobody cares. Who the hell needs us retirees?”

Although shops and supermarkets still receive supplies, money is short, particularly since Ukraine’s government in November suspended banking services. With banks out of commission and cash machines not working, just getting hold of money to buy basic groceries is tough.

The banking freeze was part of an apparent Ukrainian plan to suffocate the separatists. But while rebel battle-readiness has shown no sign of diminishing, the most deprived in eastern Ukraine are running out of options.

The already thin aid supply could dwindle further if fighting resumes on a wide scale in the east. On Wednesday, exceptionally powerful blasts were seen on a web camera monitoring the Donetsk airport, which has been under siege for months; Leonid Matyukhin, a Ukrainian security spokesman, on Wednesday claimed the rebels now have systems to fire rockets with fuel-air warheads, which cause intense and extended blasts.

Some assistance has come from the charitable foundation of billionaire Rinat Akhmetov, whose vast wealth is founded on the industrial output of this coal-rich region.

Akhmetov, however, is a contentious figure in eastern Ukraine. Although a major provider of employment, he is regarded with profound suspicion by many impoverished locals. Still, his standing improves with every consignment of goods that reaches separatist-held regions.

Even those deliveries, brought in from other parts of Ukraine, have had trouble reaching their destination.

Amnesty International said it received reports before the New Year holiday of volunteer battalions fighting alongside Ukrainian government forces who prevented the Akhmetov aid convoys from getting through. The battalion justified its actions by arguing that the food and clothes in the trucks could ultimately help support the separatists, Amnesty says.

“The humanitarian situation in the east is very dire. People have not been receiving pensions and salaries for a long time,” said Amnesty researcher Krasimir Yankov. “It’s one thing to check the content of these convoys, but it’s a different thing to force the population into starvation.”