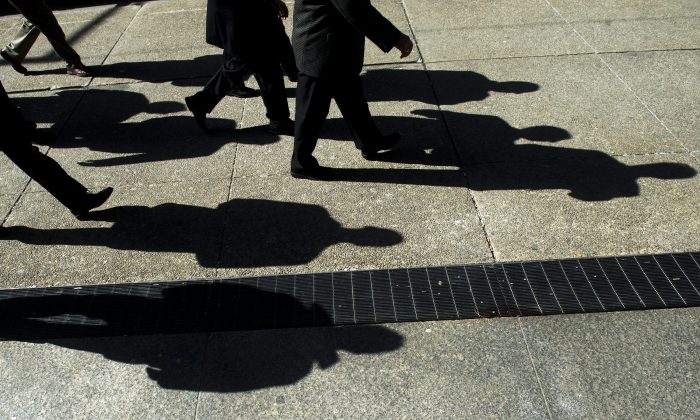 Amid widespread concerns about talent and labour shortages, there is much evidence that the incomes of many workers are under downward pressure, including a new study showing that from 1990 to 2009, the share of wages in national income decreased in 26 of 30 developed economies. (The Canadian Press/Nathan Denette)
Business & Economy

Labour Shortages Not About A Shortage Of Workers

An odd feature of today’s economy is the juxtaposition of widespread concerns about talent and labour shortages together with evidence that the incomes of many workers are under downward pressure.

While CEOs, human resource managers, and business gurus proclaim that recruiting, retaining, and motivating skilled employees is key to their organizations’ success, a sizable body of economic data presents a somewhat different picture–one of predominantly stagnant real (inflation-adjusted) earnings for a significant fraction of the workforce.

A new study from the Organization for Economic Cooperation and Development (OECD) confirms that “labour” has been losing ground to “capital” in almost all advanced countries. It finds that, from 1990 to 2009, the share of labour compensation in national income decreased in 26 of 30 developed economies.

Overall, while workers garnered 66 percent of national income in the OECD in the early 1990s, by the latter part of the last decade the proportion had dwindled to 60 to 62 percent. The drop may seem small, but it is striking because in the four decades prior to 1990, the share of income flowing to workers tended to be very stable.

In a world where qualified employees seemingly are hard to find, how are we to understand labour’s slumping income share? The aftermath of the 2008-09 recession and global financial crisis no doubt has played a role in tempering wage gains. But academic research points to other, longer-term factors that have also contributed to the trend.

Perhaps the most powerful is the way technological change has reshaped the workplace and altered the incentives for businesses to use labour and capital in the production process. In particular, ongoing advances in and greater use of information and communications technologies (ICTs) have reduced the relative price of “capital goods” (e.g., equipment, machinery, advanced software), prompting businesses to deploy more IT and other forms of capital in their operations.

This dynamic–well-established in manufacturing and now spreading to many service industries–has eliminated significant numbers of middle-income jobs. According to a recent study by American economists Loukas Karabarbounis and Brent Neiman, decreases in the relative prices of capital goods (versus the price of labour) account for approximately half of the observed decline in the labour share of national income in the OECD.

Globalization and most nations’ increased reliance on international trade and investment have also affected the job market. Across broad swathes of the economy, lower trade barriers and heightened competition from imports have reduced the prices of consumer goods as well as workers’ bargaining power.

Among OECD economies, rising import penetration is associated with a falling labour income share in the affected industry sectors (although this is partly offset by employment and wage gains in export-oriented sectors, whose growth is enabled by trade liberalization).

A third candidate explanation for the lower percentage of national income now collected by workers is what economists refer to as “institutional change”–e.g., lower union density, a shift toward temporary and other forms of non-standard work, and the steady disappearance of defined benefit pensions in the private sector (employer pension contributions and other non-wage fringe benefits are counted as part of labour compensation and thus serve to boost employees’ share of total income).

It’s difficult to square labour’s shrinking share of economy-wide income with often-heard complaints about an insufficient supply of workers. To some extent, the business organizations voicing such concerns are reacting to mismatches between the pool of available skills and what employers seek when looking to fill vacant positions.

Skills mismatches certainly exist in the job market, reflected in part by high rates of underemployment among recent post-secondary graduates. Dealing with mismatches requires expanding education and training capacity in high-demand fields and reducing the resources allocated to lower-demand areas of training and academic study.

But in a market economy, any sensible strategy to address labour mismatches must also entail changes in relative compensation levels, such that compensation rises in occupations experiencing significant shortfalls in the supply of qualified workers.

As Canada grapples with the coming wave of baby-boomer retirements, the income dynamics playing out in the job market may shift again. Many employers will face mounting pressure to provide competitive pay and working conditions. Business models based on access to low-wage Canadian labour may become less viable as unemployment rates decline and the growth of the workforce slows.

Looking further ahead, a tightening job market could even reverse the recent fall in the labour share of national income. If so, the net result arguably would be a healthier and more balanced economy.

Jock Finlayson is Executive Vice President of the Business Council of British Columbia.