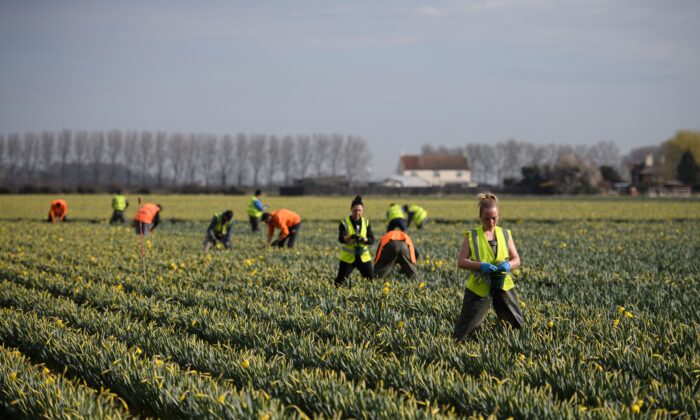 Flower pickers from Romania harvest daffodils to be transported to the cold store on Taylors Bulbs farm near Holbeach, eastern England, on March 15, 2022. (Oli Scarff/AFP via Getty Images)
UK

British farmers have lost tens of millions of pounds this year as a result of severe labour shortages, a survey has revealed.

The survey, conducted by the National Farmers Union (NFU), found that 4 in 10 growers had suffered crop losses thanks to a lack of pickers.

With worker shortages averaging 14 percent across the industry, more than £60 million ($73 million) worth of food is thought to have been wasted in the first half of 2022.

According to the survey, growers are bracing for a 4.4 percent fall in production next year.

NFU Deputy President Tom Bradshaw said, “It’s nothing short of a travesty that quality, nutritious food is being wasted at a time when families across the country are already struggling to make ends meet because of soaring living costs.”

The survey includes results from 199 growers across England and Wales, which between them employed over 22,000 seasonal workers.

According to survey results, 63 percent of workers were recruited through the Seasonal Workers Scheme.

The demand for seasonal workers is only expected to grow next year, as farm businesses expect 69 percent of workers to come through the scheme in 2023.

Currently, the Seasonal Workers Scheme provides up to 40,000 six-month visas to bolster the horticulture sector.

Liz Truss, the Tory leadership candidate, has pledged to expand the scheme beyond its 2024 deadline, along with increasing the labour pool by an unspecified amount.

The boss of one global food business said farmers were being “nannied” by the government, taking aim at caps on the number of foreign workers allowed into the country.

Julian Marks, director of farming business Barfoots, said they had lost asparagus and courgettes earlier this season because at least 70 jobs were unfilled.

He told Times Radio: “The key to us is investing for the long term, so one of our big asks is to actually have some certainty with the seasonal workers programme that goes beyond 2023 and 2024.

“Also to remove some of the red-tape arbitrary caps on the number of people that come in.

“We’re a grown-up industry with grown-up people and being nannied by the Home Office is really not good for certainty at any level.”

NFU Vice President David Exwood said: “Farming’s a long-term game. Food just doesn’t appear, it’s years in the planning and so you need to be able to plan ahead.

The UK government responded by stressing that labour shortages are “affecting countries around the world.”

A spokesperson for the Department for Environment, Food and Rural Affairs said the government has already extended the Seasonal Workers Scheme to include poultry and ornamental horticulture.

The government has also conducted a review into automation and is working to encourage people to take up jobs in the farming sector, the spokesperson said.