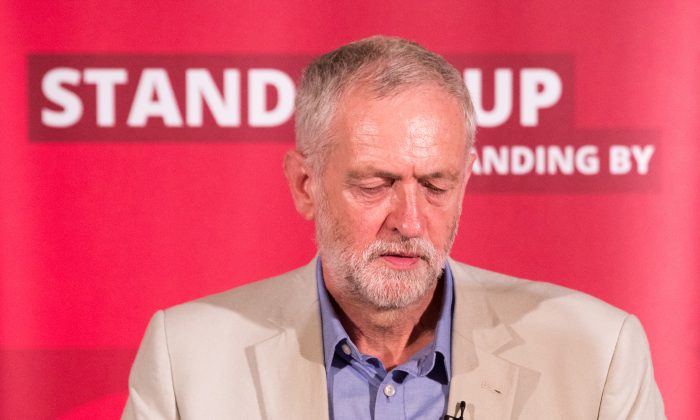 LONDON—Labour Party leader Jeremy Corbyn is facing an open revolt as political turmoil continues to grip Britain after the country voted to leave the European Union.

The main opposition party was in turmoil Sunday with two members of the shadow cabinet leaving their posts in a direct challenge to Corbyn.

“There is no confidence that we will be able to win a general election as long as Jeremy remains the leader,” Benn told the BBC’s flagship breakfast show. “He’s a good and decent man, but he is not a leader. And that’s a problem.”

Benn’s dismissal was followed by the resignation of Labour health spokeswoman Heidi Alexander, who released a letter saying a change of leadership was needed.

“Those who will be hit hardest by the economic shock associated with the vote to leave the EU need a strong opposition, as do those communities who fear rising levels of intolerance, hatred and division,” she wrote.

However, Corbyn’s allies said he would remain in his post.

Labour legislator and Corbyn backer Diane Abbott said Sunday morning Corbyn would not step down despite the mounting opposition, adding he is still backed by party members.

The vote to quit the EU was widely seen as a stinging rejection of left-wing Labour, with many traditional Labour districts voting in defiance of the party leadership’s campaign to stay in the bloc.

Many party figures said Corbyn had not campaigned effectively and had done too little to keep Britain inside the EU bloc.

Corbyn was elected party leader in September with strong support from the left wing of the party but he has not enjoyed similar backing from the party’s legislators, some of whom are now calling for him to step down.

The perceived mishandling of the EU campaign bodes poorly for any future attempt by Labour to retake its parliamentary majority from the ruling Conservative Party, which itself is in limbo following the decision by Prime Minister David Cameron to quit in the fall.

There were indications Sunday that other members of the shadow cabinet, an advisory board of senior party figures, may step down to intensify the challenge to Corbyn’s position.