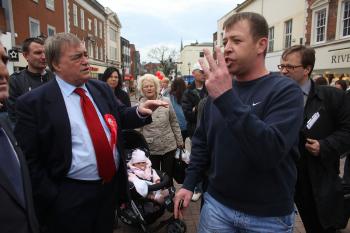 Labour MP John Prescott (L) being questioned on employment and immigration issues as he campaigned on April 28, 2010 in Dudley, England. (Christopher Furlong/Getty Images)
US

Labour Party on Verge of Bankruptcy

Simon Veazey
Freelance Reporter
Simon Veazey is a UK-based journalist who has reported for The Epoch Times since 2006 on various beats, from in-depth coverage of British and European politics to web-based writing on breaking news.
View profile
Follow
biggersmaller
Print
The Labour Party is on the verge of bankruptcy and needs to tighten up its financial management or be ruined by a £20 million debt Former British Deputy Prime Minister John Prescott has warned.

In a pitch for the party treasury post in the Guardian newspaper he said: “We are facing a long-term decline in membership and a crisis in funding."

“We are only kept alive by the Herculean work of party staff and volunteers, trade union contributions, high value donations and the goodwill of the Co-op bank.”

Deputy Prime Minister for 10 years under Tony Blair, Prescott became a member of the House of Lords earlier this year.

He said that the party had lost the election in May due to inadequate funding.

The Conservative election coffers–bolstered by funding from billionaire donor Lord Ashcroft–were three times better-stocked that those of the Labour Party.

"Their value and role will be even more significant as the ConDem coalition looks to tackle party funding to our disadvantage.”

He highlighted the frugal approach to the recent election campaign, mentioning how he had travelled 5,000 miles in a Ford Transit Van, campaigning for marginal seats.

He pointed out that the well-funded election campaign had brought the party to power in 1997. “In 1997, the month-long battle-bus tour, with hotels, support staff and coach drivers, cost us in excess of £150,000.”