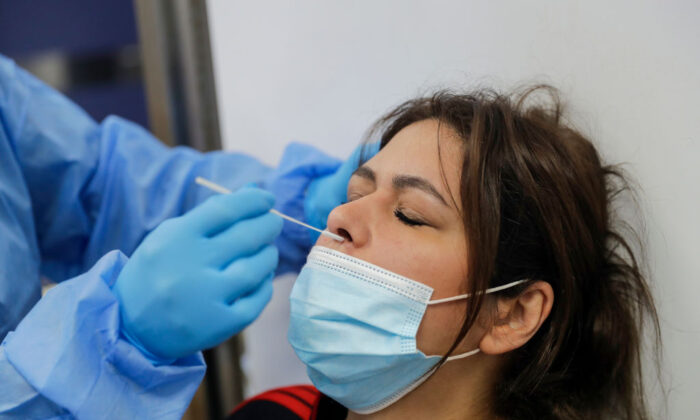 A health care worker administers a PCR test on a woman in the intensive care unit of the Rafic Hariri University Hospital in the Lebanese capital Beirut, on Jan. 5, 2021. (Joseph Eid/AFP via Getty Images)
WORLD

UK health officials on Friday said that an estimated 43,000 people may have been incorrectly told they do not have COVID-19 due to problems with testing at a private laboratory.

The Immensa Health Clinic Lab in Wolverhampton, England, was suspended from processing test swaps after reports surfaced of false negatives. The faulty test results were among tests that were processed a the facility between sometime in early September and this week, officials with the UK Health Security Agency said.

“Around 400,000 samples have been processed through the lab, the vast majority of which will have been negative results, but an estimated 43,000 people may have been given incorrect negative PCR test results” located primarily in southwest England, according to the agency.

The UK Health Security Agency appeared to downplay speculation that the issue is widespread, saying the faulty results are “an isolated incident attributed to one laboratory.” Individuals who were affected would be contacted and told to get another test, the agency continued.

“The number of tests carried out at the Immensa laboratory are small in the context of the wider network and testing availability is unaffected around the country,” it said, adding that samples that were sent to the facility have been “redirected” to other labs.

One local authority in England, West Berkshire Council, has told people who were tested at the government-run Newbury Showground site between Oct. 3 and Oct. 12 and were told they were negative to get tested again.

Immensa Health Clinic was founded in May 2020—several months after the start of the pandemic—and has reportedly been awarded contracts worth $234 million to process PCR test results.

Andrea Riposati, the company’s chief executive, issued a statement in the UK government’s news release and said it is “fully collaborating” with an investigation and didn’t “wish this matter or anything else to tarnish the amazing work done by the UK in this pandemic.”

Other than the Immensa Health Clinic, Riposati also runs Dante Labs, which is being investigated in a separate matter by the UK Competition and Markets Authority over claims the firm failed to deliver PCR test results, reported the Reuters news agency.

Some scientists issued warnings that the false negatives may have allowed for the spread of COVID-19.

“We now know 43,000 people are believed to have been given false negatives, but this doesn’t even come near to the cost of the mistake,” Kit Yates, who works with the University of Bath’s Department of Mathematical Sciences, told the news agency. “Many of these people will have been forced into school or work potentially infecting others. This could be part of the reason behind some of the recent rises we’ve seen.”

Britain conducts about 1 million CCP (Chinese Communist Party) virus tests a day and reported almost 40,000 new infections a day over the past week. The CCP virus, also known as the coronavirus, causes COVID-19.