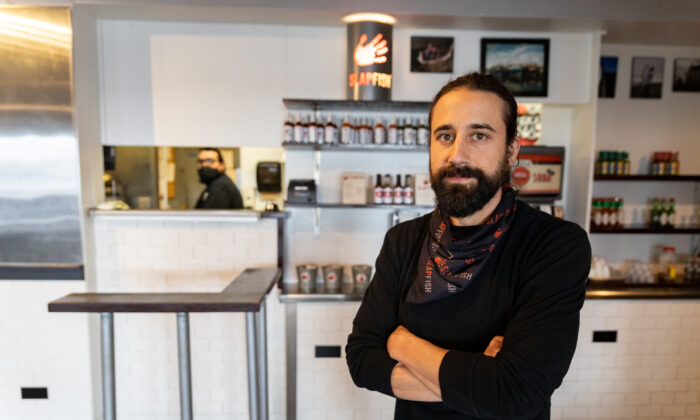 There’s an irony to the new dining area at Chef Andrew Gruel’s Huntington Beach, California, restaurant. Although he’s now permitted to fill it to capacity under California’s lifted guidelines, he can’t find the staff to work it.

Statewide labor shortages and inflation are among the challenges restaurateurs are now facing as they crawl back to life following the pandemic-induced restrictions that hammered California’s hospitality industry.

“First and foremost, a lot of people are making enough on unemployment right now that they’re waiting this out,” Gruel, owner and head chef of Slapfish, told The Epoch Times.

The demand for labor is a sharp contrast to December 2020 when the state banned indoor and outdoor dining for the second time.

Hospitality workers “hit rock bottom,” prompting Gruel to launch a GoFundMe page to support the embattled employees. He dispersed funds directly to restaurant workers and owners shortly after the ban went into effect, with donations exceeding $350,000.

Now, the empty dining area sits quietly in Gruel’s establishment, serving only as a reminder of the challenges he faces.

“This was going to be our newer … full-service oyster bar side,” he said. “They require so much labor that we’re only open five days a week now and only from [3 p.m.] to close because we can’t get the servers, we can’t get the bartenders and the oyster shuckers.

“And I’m not implying that’s laziness. A lot of people are saying, ‘Look, we were hired, fired, hired, fired, so many times since this pandemic started,’” he said, adding that many people don’t have confidence in keeping a job while California’s state of emergency persists.

To incentivize workers to apply, the restaurant is offering a $500 hiring bonus coupled with wages of up to $25 an hour, Gruel said.

Other efforts to help support the industry’s revival emerged earlier in June.

The California Restaurant Foundation, a nonprofit that invests in the state’s restaurant workforce, partnered on June 14 with celebrity Chef Guy Fieri to surprise five small-business owners with a $25,000 grant.

Jennifer Lê, co-owner of Lêberry Bakery and Donut in Pasadena, was among the recipients.

“We are so, so fortunate … the food industry has been hit hard, so badly, last year,” Lê told The Epoch Times.

The restaurant industry in California is estimated to generate about $97 million annually with more than 76,000 eating and drinking establishments that employ 1.8 million people, according to the California Restaurant Association. In an economic Yelp report published last year, 61 percent of restaurants permanently closed, equating to 19,590 across the country.

Lê said her bakery normally employs upward of a dozen people, but because of the labor shortage, is struggling to fill positions.

Her partner, Raynard Ledford, is “like a chameleon,” she said, as he’s taken on several roles around the bakery to keep the business running.

“Unfortunately … the minimum wage in Pasadena is $13.25, which is higher than much other surrounding areas. But, when you’re given government checks that are a little bit higher, we lost a few because of that; they’ve been home for a year.”

Lê said she’s been searching for two months for a skilled cake decorator, which is a central responsibility in her bakery offering custom cake designs.

“I know of other places; they have a 50 percent shortage of staff,” she said. “They’re just doing the best they can and it’s unfortunate.”

Restaurants aren’t the only ones struggling with a manpower deficit.

Brad Goehring, a wine grape grower in Lodi, told The Epoch Times that the labor shortage—coupled with the state’s agricultural regulations—places a burden on small farmers and ranchers.

“We’re just heavily overregulated, the cost of labor, minimum wage keeps going up, and our costs and administrative responsibilities keep going up. It’s really become a burden to be an employer in California,” Goehring said.

The “unemployment all by itself” isn’t the entire reason workers aren’t returning, he said. “There’s too many incentives not to come back to work,” referencing the pandemic assistance as well.

It has resulted in Goehring’s vineyard being 50 percent short of its labor needs. Before the pandemic, there were at least 500 people picking grapes. There are now about 150.

Time is another challenge, as the vines require consistent attention.

“Business is highly dependent on labor, trucking, paper products, and wood pallets. All of them are suffering from labor shortages,” Erik Wilson, who owns a spraying business and grows cantaloupes, told The Epoch Times. “Then, enter the drought and it’s like getting hit in the face and stomach.”

A shortage of paper products and pallets have created a new set of challenges as harvesters are unable to transport product to stores without them, resulting in demand-driven inflation.

“Just simple wood pallets have doubled in prices there’s almost a shortage of them,” Wilson said.

Some forecasts predict the inflation rate will increase to 2.9 percent, up from a previous 2.3 percent estimate.

It’s a concern for business owners such as Gruel.

“We’re seeing an increase in prices across the board,” he said, adding that Slapfish will soon have to reform its menu to adjust for labor and inflation cost.

Seafood restaurants such as Slapfish are facing an increase in the cost of lobster and other seafood items. Gruel said lobster went from $18 a pound up to $40 “virtually overnight,” because “a lot of the boats couldn’t go out, or because the cost of fuel made it inefficient for the boats to go out, people weren’t dropping traps in the water.”

“Our biggest item that we sell is lobster; we are very fortunate because we’re integrated through the supply chain. So, we’ve been able to buy some future on lobster before these issues. But because the processing facilities couldn’t find anybody to pick the lobster, then it was a perfect storm,” he said.

“I think that we’re going to see hiccups through the supply chain for a year, two years. I don’t think we’re going to see normalcy, I fear,” Gruel said. “In an industry like the restaurant industry, where margins are either nonexistent or incredibly thin, you rely on projections and analysis.”

Gruel said when businesses “cannot project and analyze purchases and labor based on variable conditions that you can’t control” it makes it difficult to run a business.

Wilson added: “I don’t know how we’re going to get that inflation under control because people don’t think about the smallest things like wooden pallets or cardboard boxes and things that are all part of the process of getting the food from the field to a fork.”