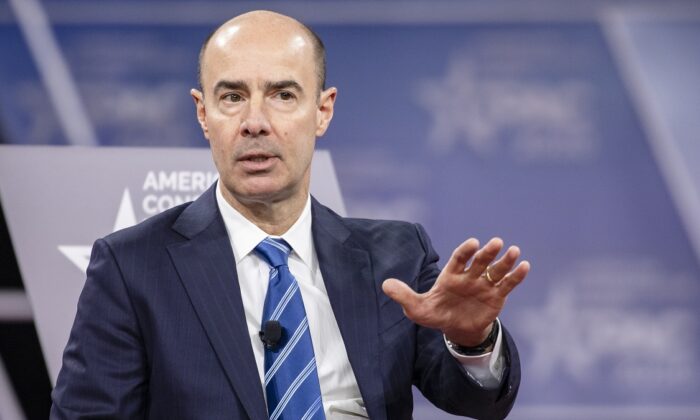 The comments came during an online discussion panel hosted May 26 by the Competitive Enterprise Institute (CEI) and after Trump signed Executive Order 13924 on May 19.

The executive order is aimed to boost the U.S. economy by taking immediate steps to eliminate or suspend regulations impeding economic recovery. It also strengthens basic due process protections for Americans involved in agency regulatory proceedings, as part of what the administration calls the Regulatory Bill of Rights.

“To protect our people and defeat the virus, we must also defend the health of our nation’s economy,” the president said at the time. “To achieve this goal, we’ve slashed red tape and bureaucracy and unleashed the largest industrial mobilization since World War II.”

The executive order instructs federal agencies to look at regulatory actions they could take to encourage growth in the economy. It instructs “federal agencies to use any and all authority to waive, suspend, and eliminate unnecessary regulations that impede economic recovery.”

Critics say officials in the administrative state—sometimes called the regulatory state—are unaccountable to voters and allow unelected bureaucrats to usurp the functions of the executive, legislative, and judicial branches. Congress, they say, is supposed to make the laws of the land, but lawmakers have steadily ceded that body’s constitutional powers to the administrative state, to the overall detriment of society.

“The order and the president’s deregulatory agenda, more broadly, have the potential to be the most consequential regulatory change since the introduction of cost-benefit requirements for agencies during the Reagan administration,” Scalia said.

The regulatory change to which Scalia was referring was President Ronald Reagan’s innovative Executive Order 12866, which required federal agencies to present a cost-benefit analysis to the White House before creating a new regulation.

“President Trump has had the most consistently disciplined approach toward agency regulations of any president since at least Ronald Reagan,” he added.

One old rule from President Bill Clinton’s administration allowed the department’s Administrative Review Board (ARB) to hear cases and issue decisions in the name of the secretary of labor without the secretary actually being involved in deciding the case.

The ARB issues final agency decisions in disputes arising out of worker protection laws, including whistleblower and public contract laws.

“The jurisdiction of the Board includes, but is not limited to … environmental, transportation, and securities whistleblower protection; temporary immigration programs; child labor; employment discrimination; job training; and federal construction and service contracts,” according to the ARB’s website.

Cases find their way to the ARB on appeal from decisions by DOL administrative law judges or determinations made by the administrator of the Department’s Wage and Hour Division.

But Scalia said the department has changed the rule and now is promoting accountability by allowing the secretary to participate in adjudicating the cases before the ARB.

Another change involves a rule that requires employers to provide retirement plan statements to employees in hard copy form. The rule was changed to allow the statements to be provided electronically. This change will save businesses $3.2 billion over a 10-year period, he said.

Another involved a rule from the preceding administration that barred employees who work hours that fluctuate from week to week from receiving a bonus. “We looked at it and said that it’s wrong,” and now those employees can be paid a bonus, Scalia explained.

“There has been probably a tripling in the occupations that require licenses over the last 30 years or so,” he said. This had made it very difficult for employers to fill jobs and for Americans to obtain services, he said.

“CEI has identified dozens of regulations that were never needed and now hinder response to, and recovery from, this pandemic,” CEI President Kent Lassman said.

“Widespread repeal is necessary and on the way. The work of recovery and a resurgent economy begins now and won’t end until we have refashioned the relationship between Americans and an overbearing regulatory state.”

“It’s not too much of a stretch to say that the executive order came right out of the CEI playbook,” Lassman said.

CEI is conducting what it calls the #NeverNeeded public education campaign, in which it argues that “many regulations being scrapped to help fight COVID-19 were never needed in the first place.”