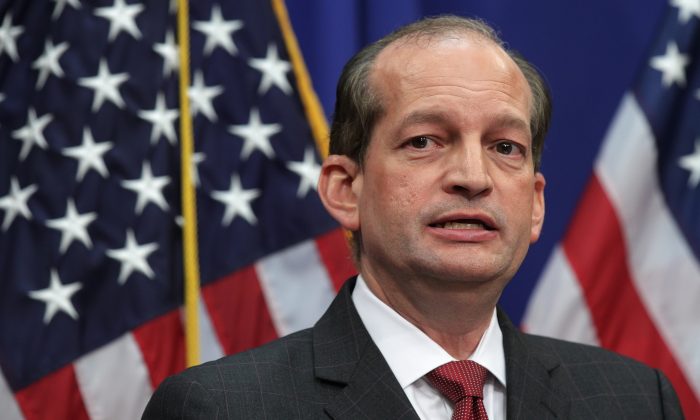 Secretary of Labor Alex Acosta during a press conference at the Labor Department in Washington on July 10, 2019. (Alex Wong/Getty Images)
Trump Administration

Labor Secretary Alexander Acosta defended the decision to give what has been seen as a lenient deal 11 years ago to financier Jeffrey Epstein, who was facing charges for prostituting minors in Florida back then and is facing similar charges now in New York.

In his former role as U.S. Attorney for Southern District of Florida, Acosta made Epstein plead guilty on state charges of prostituting minors and having sex with minors in exchange for not bringing federal charges against Epstein.

As a result, Epstein only spent 13 months in a Florida jail, during which time he was allowed to leave the jail and work from his office.

Journalists and others who have probed the Epstein case over the years have suspected that he received lenient treatment due to his high-level connections, including to former President Bill Clinton, whose wife, Hillary Clinton, was running for the presidency back then.

During a July 10 press conference, Acosta said he “was very careful to not negotiate” the Epstein deal himself, leaving it to career lawyers at his office, who had doubts if the case would succeed at trial. He backed his argument with affidavits from a government lawyer and an FBI agent who worked on the case.

Back then, Acosta said, America was less sympathetic to victims of sex trafficking and it would have been harder to convince the victims to testify and easier for Epstein’s lawyers to attack their credibility in court.

“We live in a very different world,” Acosta said. “Today’s world treats victims very, very differently. Today’s world does not allow some of the victim shaming that could have taken place at trial 12 years ago. Today’s world understands that when interviewing victims, when eliciting testimony, that testimony can be sometimes contradictory, that memories are difficult.”

The Miami Herald reported that Epstein hired private investigators who dug into the victims’ past to find something to damage their credibility.

Epstein’s lawyer back then, Alan Dershowitz, convinced then-Palm Beach State Attorney Barry Krischer “that the girls would not be credible on the witness stand,” the paper learned from then-Palm Beach Police Chief Michael Reiter and Detective Joseph Recarey, who worked on the Epstein case.

Acosta emphasized that the Florida State Attorney’s Office came up back then with an even worse outcome and was ready to let Epstein go without jail time and without even registering as a sex offender.

He said that for federal prosecutors to insert themselves into a state case is rare to begin with.

“We did what we did because we wanted to see Epstein go to jail,” he said.

Acosta was also questioned about a morning meeting with Epstein’s lawyer at a Marriott hotel in West Palm Beach in October 2007.

It was on that morning that the “deal was struck,” Miami Herald reported.

Acosta countered that the meeting actually happened after the deal was negotiated and that he was at the hotel for a conference.

Epstein’s victims have also objected that the government failed to notify them about the deal.

Acosta said the office did try to notify them, but only after securing Epstein’s agreement with the plea deal. Since the deal included a provision granting the victims restitution, if Epstein decided to decline the deal and go to court, he could have claimed the women only testified against him because the government informed them there could be money in it for them.

“Talking about this would allow him to make the argument in trial that their testimony was compromised,” Acosta said, invoking one of the affidavits as evidence.

Epstein was arrested again, reportedly on July 6, and indicted in New York on charges that he sexually abused and exploited dozens of girls, some as young as 14, in New York and Florida.

Acosta said he welcomed the new charges and called on more alleged victims of Epstein to come forward.

President Donald Trump called Acosta “a very good Secretary of Labor,” on July 9, but he also said he’d be looking “very carefully” at the decisions surrounding the Epstein deal.