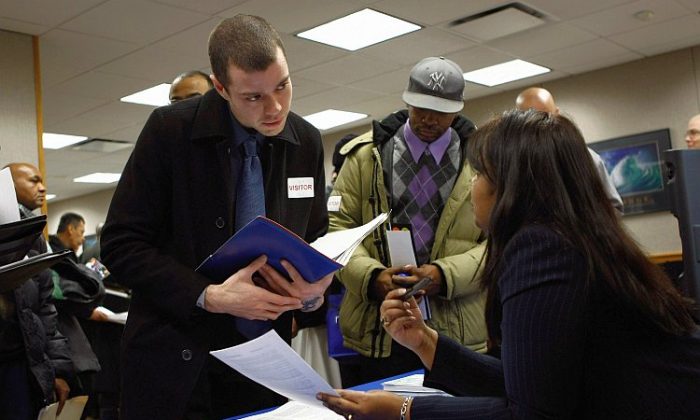 Former U.S. Marine Sean Ghigliotty, unemployed for nine months, meets a potential employer during a veterans job fair Feb. 1 in New York City. According to a report released Feb. 3 by the Bureau of Labor Statistics, 257,000 jobs were added to the private sector in January. (John Moore/Getty Images)
US

The Bureau of Labor Statistics on Friday released its much-anticipated monthly report on the state of American unemployment, which indicated relatively robust growth in the labor market that exceeded experts’ original predictions.

According to the report, the U.S. economy added a total of 243,000 jobs in the month of January, due to an increase of 257,000 jobs in the private sector and a respective decrease of 14,000 government jobs.

“Job growth was widespread in the private sector, with large employment gains in professional and business services, leisure and hospitality, and manufacturing. Government employment changed little over the month,” said bureau’s acting Commissioner John M. Galvin in the report, indicating that the recovery is affecting many sectors in the broader economy.

Meanwhile, the unemployment rate, which has decreased for the fifth straight month, was lowered to 8.3 percent, down 0.2 percentage points from 8.5 percent for the month of December 2011.

The news wasn’t all promising however, as the report indicated that there were still 1.1 million discouraged workers, little changed from a year ago. Discouraged workers are job seekers who have given up looking for work and have dropped out of the labor force.

President Barack Obama, speaking about his plan for a new Veterans Job Corps at a local fire station in Arlington, Va., capitalized on the good news in his speech to the audience.

“Now, this morning, we received more good news about our economy. In January, American businesses added another 257,000 jobs. The unemployment rate came down because more people found work. And altogether, we’ve added 3.7 million new jobs over the last 23 months,” said the president.

“Now, these numbers will go up and down in the coming months, and there’s still far too many Americans who need a job, or need a job that pays better than the one they have now,” he added. “But the economy is growing stronger. The recovery is speeding up. And we’ve got to do everything in our power to keep it going.”

President Obama also warned Congress not to impede the recovery, urging an extension of the payroll tax cut and unemployment insurance.

After several months of shaky job numbers from the middle to end of 2011, the latest jobs numbers appear to be indicating a strengthening, though still fragile recovery. Last month’s relatively strong jobs report numbers caused some analysts to view it as a statistical fluke; the January numbers may be cause for optimism for Americans, and a boost for the Obama administration in an election year.

Wall Street on Friday also rallied in response to the rosy jobs report. The Dow Jones Industrial Average rose to its highest point since the beginning of the global financial crisis, to close at 12,862.23, while the technology-based NASDAQ rose 1.6 percent to an 11-year high, closing at 2,905.66.