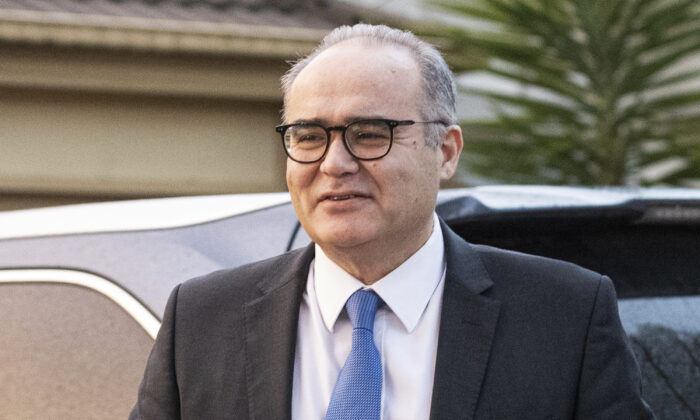 Adem Somyurek is seen outside his home in Melbourne, Australia, on June 16, 2020. AAP Image/Daniel Pockett)
Australia

The motion to re-investigate Victoria Labor’s 2014 red shirts scandal by the Ombudsman and potentially IBAC has passed the state parliament’s upper house with votes 19 to 17 after Labor MP Kaushaliya Vaghela crossed the floor to vote in favour of the motion.

The red shirts scandal (pdf) from 2014 was due to Labor paying hiring field organisers as casual electorate officers so that they will be paid by parliamentary funding to engage in campaigning.

Introducing his motion to Victorian parliament on Feb. 9, Somyurek claimed the red shirts program was designed by the Victorian Labor Premier, Daniel Andrews, ahead of the 2014 election.

“[Daniel Andrews] did something well beyond what he should’ve—he crossed the line, he designed this system,” Somyurek said.

“He told me personally that you’ve got to take part in this process whether you want to win or not.”

The scandal centred around Labor’s misuse of $388,000 in taxpayer funds by paying casual electorate officers to wear red shirts and campaign for the party in marginal seats, which is not a part of their duties.

Allegations of this scandal were first brought to attention in Sep. 2015 by former Labor staff, Jake Finnigan, who reported the rort allegations to the Victorian police.

Actions in investigating the case were put forward by then-Greens Leader Greg Barber who successfully introduced an upper house motion calling on Victoria’s Ombudsman Deborah Glass to investigate in Nov. 2015.

Though the Victorian Government fought hard to block the probe, they lost a protracted legal battle at the High Court in Apr. 2017 and the report by the Victorian Ombudsman Deborah Glass was finally handed in on Mar. 2018, months before the election.

The investigation found 23 electorate officers doing campaign work, and Somyurek, the one leading the re-investigation motion now, was also one of them.

The pay arrangement was a “60:40 split,” where 60 percent of the wages were paid by Labor and 40 percent by the parliamentary funds.

Despite the findings, the report made little impact in the 2018 round of elections with the Labor Party re-elected.

In 2020, Adem Somyurek resigned from the Labor Party after Channel Nine’s 60 Minutes program on Jun. 14 and in The Age newspaper on Jun. 15 in 2020 reported him of paying for other people’s party membership to create fake branch members and amass political influence under the help of parliamentary staff which is against the rules for the Australian Labor Party.

After his resignation, Somyurek had warned that he was “not going to stand” the punishment he received.

Labor MP Anthony Byrne, the first witness to front the Operation Watts IBAC hearing, gave a damning indictment of the prevalence of branch stacking in Victoria, saying it was “out of control” and listed several state members of parliament whom he knew to be involved in branch stacking, including Kaushaliya Vaghela, who crossed the parliament floor in the current motion to re-investigate the 2014 Victoria Labor scandal.

Kaushaliya’s resignation statement released on Feb. 9 has called for further investigations into branch stacking and electorate officers being used for factional purposes, saying that branch stacking is “endemic” to Labor.

She said the Watts inquiry conducted by IBAC was a “grave injustice”, ending the statement with “some people are more equal than others.”

The Victorian Labor Premier Daniel Andrews on Feb. 10 confirmed that Kaushaliya had told colleagues that she would resign.

“I haven’t been told that [she would resign], but I understand colleagues of mine have been told that. That’s entirely a matter for her,” he said.

He refused to comment on Somyurek’s win at the upper house, saying that he is “far too busy. I’m not sworn in to be a commentator, I’m sworn in to get on and get things done, and that’s what I do every single day.”

Somyurek celebrated the victory in a post on Twitter declaring that “we have stopped Victoria descending into Tammany Hall corruption.”

“We may have dodged a bullet with this motion. Now over to the integrity bodies.”

The successful motion will give the Victorian Ombudsman and IBAC powers to expand their terms of reference and inquire into all factions of the Labor Party.