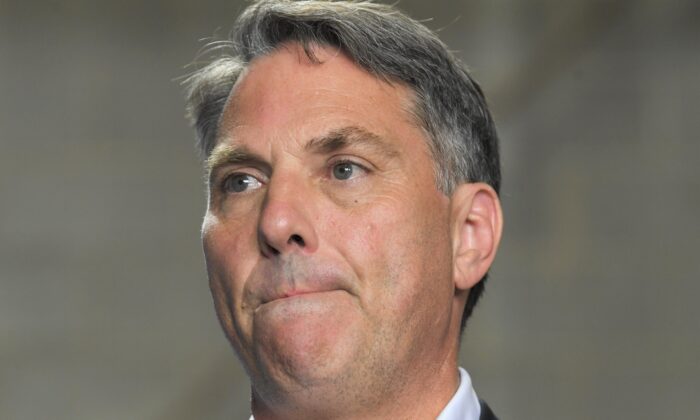 The Australian opposition’s deputy leader Richard Marles has been forced to explain his high number of visits to the Chinese Embassy over the past five years—more than the foreign minister—despite not holding the shadow foreign policy portfolio.

Marles is alleged to have engaged with Chinese diplomats at least 10 times from 2017 despite deteriorating bilateral relations between Australia and China, according to a report from The Australian newspaper.

The senior Labor Party shadow minister continues to face questions over his engagement with the Chinese Communist Party including authoring a short book advocating for a stronger presence from Beijing in the Pacific region.

Marles told reporters on May 13 that the federal government was aware of the meetings and had supported them.

“There’s no secret to what I’ve been doing, and I could not have been more transparent,” he said. “All of this has got pretty desperate and a bit silly.”

“It would be good if the government put as much focus into its relationship in the Pacific as it does into my diary,” he added, saying he maintained relationships with all diplomatic corps in Canberra. “I’ve seen the United States ambassador almost 30 times.”

However, the presiding Foreign Minister Marise Payne revealed at the National Press Club later that day that her office had only been notified about a “small number” of Marles’ meeting with Chinese representatives, noting as well that her office does not authorise meetings but only keeps a note of it.

“I would say it is important to be consistent, that is certainly the approach this government has taken in all of our engagement,” she said. “We know from reports that Mr. Marles has, for example, confirmed that he has provided a speech in advance to the Chinese Embassy, I would not do that myself. Frankly I would not provide a speech in advance to any other embassy for any reason.”

Marles had allegedly been warned by the head of the Australian Strategic Policy Institute, Peter Jennings, against trying to improve relations with Beijing via positive rhetoric or diplomacy.

The deputy leader has spent much of the election campaign fending off questions around engagement with Beijing, including a 2019 speech at the Beijing Foreign Studies University where he advocated for stronger ties.

“To define China as an enemy is a profound mistake. To talk of a new Cold War is silly and ignorant,” he said.

The deputy leader’s speech was delivered at the height of the Trump administration’s U.S.-China trade war and followed the decision by the Australian government under former Prime Minister Malcolm Turnbull to block Huawei’s participation in the 5G network in 2018.