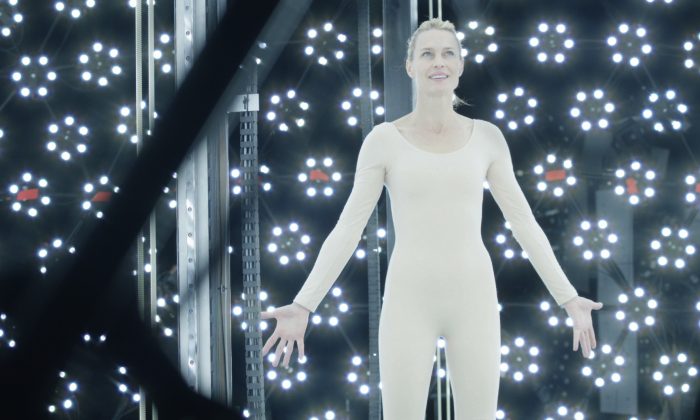 This photo released by courtesy of Drafthouse Films shows Robin Wright (playing a version of herself) projecting happiness within the machine scanning her likeness in Drafthouse Films sci-fi epic, "The Congress." (AP Photo/Drafthouse Films)
US

There are a number of movies opening on Labor Day weekend, including science fiction film The Congress and dark comedy Life of Crime.

Mexican film Catinflas, Susan Sarandon-led The Calling, and animated flick Patema Inverted are among the other releases this weekend.

An aging, out-of-work actress accepts one last job, though the consequences of her decision affect her in ways she didn’t consider. Robin Wright, Harvey Keitel, Jon Hamm.

Cantinflas is the untold story of Mexico’s greatest and most beloved comedy film star of all time. From his humble origins on the small stage to the bright lights of Hollywood, Cantinflas became famous around the world – one joke at a time.

When a team of explorers ventures into the catacombs that lie beneath the streets of Paris, they uncover the dark secret that lies within this city of the dead. Perdita Weeks, Ben Feldman, Edwin Hodge.

Detective Hazel Micallef hasn’t had much to worry about in the sleepy town of Fort Dundas until a string of gruesome murders in the surrounding countryside brings her face to face with a serial killer driven by a higher calling. Susan Sarandon, Gil Bellows, Topher Grace.

The November Man [Opened on the 27th]

An ex-CIA operative is brought back in on a very personal mission and finds himself pitted against his former pupil in a deadly game involving high level CIA officials and the Russian president-elect. Pierce Brosnan, Luke Bracey, Olga Kurylenko.

Two common criminals get more than they bargained for after kidnapping the wife of a corrupt real-estate developer who shows no interest in paying the $1 million dollar ransom for her safe return. Jennifer Aniston, Mos Def, Isla Fisher.

A world, forever beyond your expectations. In a dark, cramped, underground world of endless tunnels and shafts, people wear protective suits and live out their modest hard and yet happy lives. Yukiyo Fujii, Nobuhiko Okamoto, Shintarô Oohata.

When an affluent matriarch gathers her dysfunctional family for a holiday at their Northern California lake house, her carefully constructed weekend begins to come apart at the seams, leading her to question her own role in the family. Patricia Clarkson, Zachary Booth, Joseph Cross.

The Last Of Robin Hood

In a wintry small town, the body of a teenager named Jamie Marks is found by the river. Adam, the star of his cross-country team, becomes fascinated with Jamie-a boy nobody really knew or interacted with, except occasionally to bully him. When Jamie’s ghost begins to appear both to Adam and Gracie, the classmate who discovered the body, Adam is caught between two worlds. Judy Greer, Liv Tyler, Cameron Monaghan

Wartime, 1942. Singapore. An Australian fighter pilot shot down in combat awakens suspended in the treetops. As night devours day, he must navigate through dangerous jungle in search of sanctuary. Khan Chittenden, Tzu-yi Mo, Robert Menzies.

The film follows American David Reynolds, widowed from his Colombian-born wife, who flies to Bogota with his new fiancée to retrieve his rebellious teenage daughter Jill. En route to the city of Medellin, a car accident leaves them stranded in a rundown isolated inn. When they discover the old innkeeper has locked a young girl in the basement, they are determined to set her free. Peter Facinelli, Sophia Miles, Nathalia Ramos.

The Strange Color of Your Body’s Tears

Following the disappearance of his wife, a man finds himself on a dark and twisted trail of discovery through the labyrinthine halls of his apartment building. Klaus Tange, Ursula Bedena, Joe Koener

Kundo: Age of the Rampant

The story of thirteen year old twins abandoned by their parents and forced to live with their cruel grandmother in a village on the Hungarian border at the onset of WWII. Laszlo Gyemant, Andras Gyemant, Piroska Molnar.

A documentary that focuses on the faces of emotionally disturbed children who are being examined by a therapist.