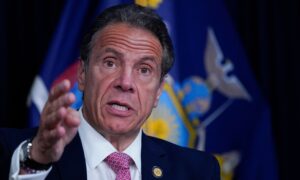 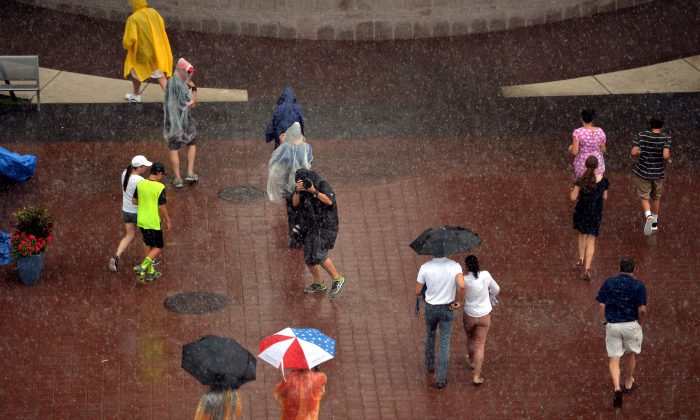 People walk to the exits after rain caused a suspension of play during the 2014 U.S. Open tennis at the USTA Billie Jean King National Tennis Center in Queens, on Sunday. (STAN HONDA/AFP/Getty Images)
New York

The weekend is coming to a stormy end in the tri-state area, with flash floods, thunderstorms, a tornado, and lightning strikes. The temperamental weather is expected to continue through Labor Day on Monday in the New York City area, marking the unofficial end of an otherwise mild and temperate summer.

Monday is off to a sunny start, but torrents of rain are expected in the afternoon, possibly disrupting outdoor celebrations on a hot and humid Labor Day.

4:15pm: A heavy t-storm near Essex county will continue E into Hudson/Manhattan/Queens/Bronx through 4:40pm, capable of downpours.

Temperatures will rise to the mid-80s in the afternoon but feel like the mid-90s because of humidity, according to Accuweather.

While the severe weather has caused many travel delays over the weekend, it is easing up. Meteorologists say it will get cooler throughout the week, but scattered showers and thunderstorms will persist.

Over the weekend, all three international airports in the area reported major delays. A total of 551 flights were delayed and 40 flights were canceled at John F. Kennedy, LaGuardia, and Newark International Saturday and Sunday, according to the tracking site Flight Aware.

Flights leaving from New York and Philadelphia reported delays up to two hours, while those leaving New Jersey and Virginia were delayed for nearly three hours, according to the Federal Aviation Administration.

The National Weather Service issued a severe thunderstorm warning around 4:20 p.m. on Sunday for the New York City area, and a flash flood warning two hours after.

The effect of the northeast storms culminated in New York City Sunday evening, with torrents of rain followed by lightning strikes and canceled events. Streets and subway stations flooded in New York and New Jersey.

The Electric Zoo music festival, which was scheduled to run from Friday through Sunday on Randall’s Island, closed down and evacuated on Sunday due to the warnings.

In Queens, the seventh day of the U.S. Open was halted because of heavy rain over the Arthur Ashe Stadium on Sunday, but play resumed just before 7 p.m.

According to NBC New York, flooding on the Cross Bronx Expressway halted traffic and stranded at least one driver, causing delays onto the George Washington Bridge.

There was also some flooding at the 157th Street subway station in Washington Heights and parts of Morningside Heights, according to CBS New York.

Total rainfall in New York on Sunday was .62 inches, according to Accuweather.

In Massachusetts, the first August tornado since 2004 hit Sunday night.

Sunday around 5 p.m. in the Bronx, three people were injured by lightning strikes on Orchard Beach in Pelham Bay, according to officials.

The three men, conscious and not seriously injured, were taken to Jacobi Medical Center according to the Fire Department of New York.

Telemundo reported that two of the men were father and son, and had hid under a tree during the storm.

In Pennsylvania, two teenaged boys were struck by lightning Sunday night while swimming in a creek, according to Lancaster Online. Both victims were taken to the hospital, and one did not survive.