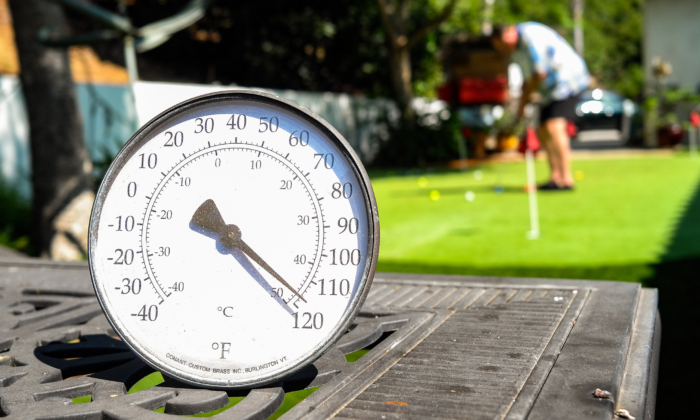 Excessive heat warnings in Southern California continued into the weekend and will remain in effect until the evening of Sept. 6, according to the National Weather Service, as parts of Los Angeles reached over 110 degrees Fahrenheit.

“I’m being sure to stay inside and read a good book today,” Phyllis Hughes, of Temecula, told The Epoch Times. “We thank the Lord as we are so blessed to have a working AC unit in our home.”

The high temperatures raised fears of electrical shortages as residents cranked up the air conditioning to combat the heat.

The California Independent System Operator, which manages the power grid, issued Flex Alerts throughout the week by calling on consumers to voluntarily cut back on electricity by closing window blinds and precooling homes before peak-electricity-use times.

Though Los Angeles County beaches and the Malibu coast will be under a less severe heat advisory, temperatures could reach 92 degrees, according to the National Weather Service.

In Orange County, excessive heat warnings will also be in place through Tuesday evening for coastal and inland areas, with weather forecasters saying Orange County beaches will be in the 80s, with inland areas hitting the 90s.

Temperatures over Labor Day weekend will rise up to 105 degrees farther from the coast in cities such as Anaheim, Garden Grove, Irvine, and Fullerton where the National Weather Service reported that “Record-breaking heat will produce a very high risk of heat illness.”

To combat this, cooling stations are currently active in both Los Angeles and Orange counties offering shelter for the temporary heatwave, with temperatures 8–12 degrees above the historical average for the counties.

“A prolonged period of very hot conditions with minimal coastal clouds is expected as high pressure aloft remains anchored over the West,” according to the National Weather Service.

To avoid heat-related injuries, the National Weather Service advises people to drink plenty of fluids, stay in an air-conditioned room, stay out of the sun, check up on relatives and neighbors, and to never leave young children and pets unattended in vehicles under any circumstances.

Wearing lightweight and loose-fitting clothing when possible is also recommended by the Occupational Safety and Health Administration along with scheduling frequent rest breaks in shaded or air-conditioned environments.

The heat wave so far set off two records in the Southern California area.

More Flex Alerts are anticipated over the weekend, particularly on Sunday and Monday, which are forecast to have the highest temperatures on par with electricity demands.