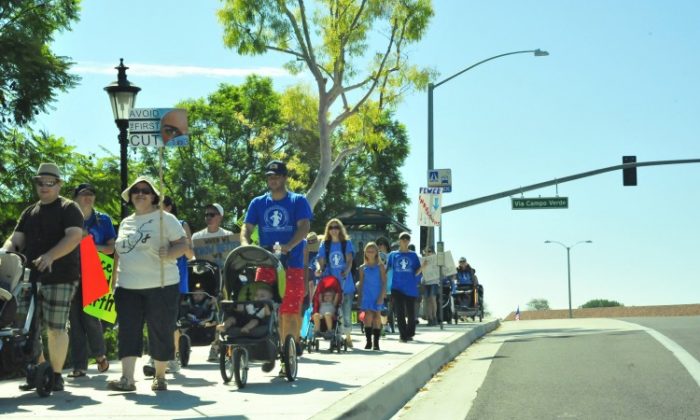 Midwives, doulas, and parents held a rally outside Saddleback Memorial Medical Center to raise awareness for birthing alternatives. The march targeted the growing number of C-sections. (Robin Kemker/Epoch Times)
US

The medical community did not direct the event, but they were meant to hear the message, as families and alternative health professionals in 110 cities across the country marched to local hospitals.

The march and subsequent rally in Laguna Hills, Calif., targeted the growing number of C-sections. Near the local Saddleback Memorial Medical Center, a facility specializing in evidence-based maternity care, rally participants said that although there is a significant potential for long-term harm with C-sections, the number of procedures is at an all-time high—totaling a third of all births nationwide.

C-sections performed before the baby is full term—known in the medical community as convenience cesareans—are particularly suspect. Parents and health professionals want to require doctors to explore at least two alternatives in such cases to justify a medical need to intervene in the normal birthing process.

“Birth is a natural phenomenon,” said Rachel, a doula. “We seldom have any complications.”

However, Rachel explains that doctors often push mothers to “get on with it” because it “holds up schedules and ties up space at the hospital.”

“Elective induction can be convenient for both the mom and the doctor, but buyer beware,” said Dr. Weinstein. “If your cervix is not ripe (dilated and thinned out) prior to an attempted induction of labor you have up to a 90 percent failure rate for your induction, which usually translates to you getting a [cesarean section].”

Risks to Mothers and Children

Maternal mortality risks rise with each subsequent C-section as more scar tissue develops. Some hospitals and midwives support patients who wish to have a vaginal birth subsequent to a C-section (VBACS).

A new study for Yale Medical School suggests that C-sections lead to more cases of brain function impairment. Researchers examined the effect of natural and surgical deliveries on a specific protein (UCP2) in mice.

According to lead researcher Tamas Horvath, these results reveal a potentially critical role of the protein in the proper development of brain circuits and related behaviors.

“The increasing prevalence of C-sections driven by convenience rather than medical necessity may have a previously unsuspected lasting effect on brain development and function in humans as well,” Horvath told Yale News.

Recent analysis shows that C-sections also lead to high blood pressure. The journal Birth reported that the incidence of persistent pulmonary hypertension in newborns delivered by cesarean section is nearly five times higher than seen among babies delivered vaginally. Other studies reveal that C-sections lead to great numbers of asthma and schizophrenia.

It doesn’t have to be this way, and Labor Day marchers want doctors and parents to know that safer alternatives are available.

B.J. Snell works nearby at the Beach Cities Midwifery and Women’s Health Care. She has been a midwife for over 35 years and has delivered over 3,300 babies. She says that at her practice, C-sections are only required in about 5 percent of cases, and inductions were required in less than 3 percent—far below the average seen nationwide.

Saddleback Memorial Medical Center has also been on the cutting edge of treatment issues. At one time, the maternity staff included midwives, but it was discontinued because of a lack of demand for the services. However, Saddleback’s C-section rate is less than half of the national average.