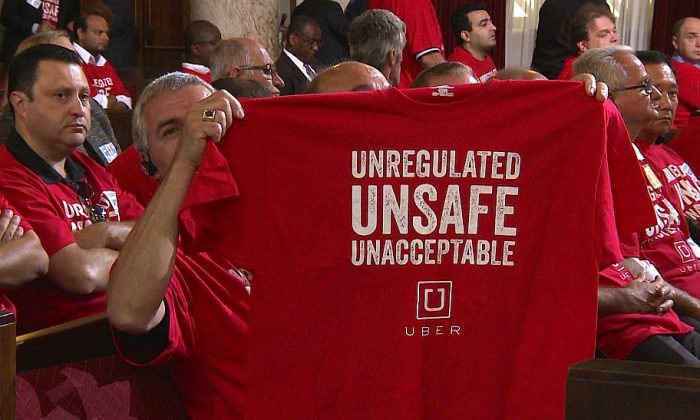 A protester shows a shirt at LA City Council on Tuesday. (Erich Zhang/NTD)
US

LOS ANGELES—A large crowd of taxi drivers brought their complaints about ride-sharing apps like Uber to Los Angeles Tuesday. These ride-sharing apps pose a potential threat to the taxi business, allowing smartphone users in more than 60 U.S. cities to order car service with a few clicks.

The taxi drivers wore red shirts with “Unregulated, Unsafe, Unacceptable, Uber” on the front as they held a rally on the steps outside City Hall. They were supported by LA City Councilors Paul Koretz and Gil Cedillo.

The drivers and councilors are pushing for State Assembly bill AB612, sponsored by Sherman Oaks Rep. Adrin Nazarin, to pass in the state Senate.

The bill would require ride-sharing companies to provide $1 million worth of insurance coverage for their drivers. Drivers would also have to undergo a fingerprint and background check with the California Department of Justice.

In addressing safety concerns this way, these proposed regulations would make it more difficult and expensive for Uber to operate, indirectly targeting taxi drivers’ most pressing issue: competition.

Jano Baghdanian, general manager of LA City Cabs, said there has been a drastic loss of revenue because of apps like Sidecar, Lyft, and Uber. He said the majority of companies are losing money and most taxi drivers, who are independent contractors, are also struggling to survive.

“These are hardworking people, and it’s unfair,” he said.

As in much of the United States, taxi drivers in the Los Angeles area are required to pay specific fees for each separate city, or they are not allowed to drive there. Regulators also set the taxi fare price. Meanwhile, ride-sharing drivers can pick their own prices.

“As long as Uber and all of the companies are playing on the same level field, then may the best man win. Whoever has the best customer service, better vehicles, that’s fine. But the city of LA is regulating very, very strongly every single thing a cab company has to do, and they allow these companies to do whatever they want,” he said.

On Friday, investors valued Uber’s net worth at $18.2 billion.