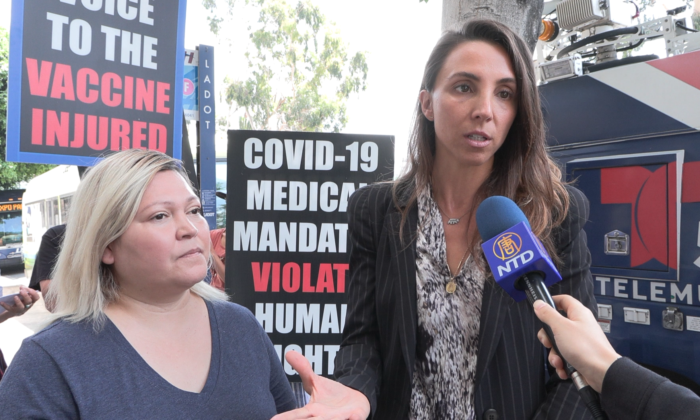 Maribel Duarte (left) is suing the Los Angeles Unified School District. She held a press conference on July 27 with her attorney Nicole Pearson (right). Duarte complained that her son was bribed by the school to take COVID-19 vaccination without her consent, and is now suffering side effects. (NTD TV)
Southern California

LOS ANGELES, Calif.—Los Angeles Unified School District (LAUSD), the second largest school district in the United States, is facing a lawsuit from a family. A mother says her 13-year-old son was bribed to receive a COVID-19 vaccine at school without her consent.

Maribel Duarte, who is suing the Los Angeles Unified School District, held a press conference on July 27 with her attorney to complain about the side effects her son is currently suffering from the vaccine.

“This is painful for me, because my son’s health … it’s not good,” Duarte said. “He’s lacking the rest. He doesn’t sleep well. He doesn’t exercise the way he did. He’s not normal to me.”

Duarte added that her son has had bleeding disorders and asthma since he was a child, so doctors recommended against him receiving a COVID-19 vaccine. She said her son’s condition worsened after getting a vaccine, with breathing difficulties and other symptoms such as depression and anxiety.

All of this happened without the school’s initial consent, according to Duarte.

California state law prohibits minors between the ages of 12 and 17 from receiving vaccinations other than those required by law without the consent of a parent or guardian.

The 13-year-old boy attends Barack Obama Global Preparation Academy, which is under the jurisdiction of the Los Angeles Unified School District.

Duarte said someone bribed her son with pizza to get a vaccine at a school vaccination event and had her son forge her signature to sign the consent form.

“He came home, and I remember asking him, ‘how was your day?’ He said, ‘Mom, I got a shot today, COVID shot.’ And I was like, ‘What do you mean?’ He said, ‘Yeah. They offered me pizza,’” Duarte recollected.

“And they also had him sign a consent in front of them, which one of the ladies told him to sign my name and sign his name.”

Nicole Pearson, Duarte’s attorney, said at the press conference: “This is not a conspiracy theory. This is not an anti-vax case.”

“This is about parental rights, having the ability to protect your children and to make the best decisions for your children based on information only you as a parent know.”

Pearson said she has spoken with the Los Angeles Unified School District and Barack Obama Global Preparation Academy on behalf of her client but has not received any response.

“When you don’t respond, we are allowed to interpret that under the law under the government code section as a rejection of our claim,” she said.

“Now we are preparing our lawsuit. We’ll be filing it next week because these injuries and these damages need to be redressed.”

Pearson also said they will continue to investigate the matter and update the details of the complaint and the allegations against the School District, which may include: absence of consent, violation of informed consent, treatment contrary to patient’s will, fraud, misrepresentation, negligence, negligent hiring and supervision, intentional infliction of emotional distress, coercion, violation of the California constitution, violation of the prohibitions of human experimentation, child endangerment, child abuse, and any other causes of action that are reasonable and reasonably inferable.

The Los Angeles Unified School District declined to comment on the matter.

“Los Angeles Unified does not typically comment on threatened, pending, or on-going litigation matters,” the spokesperson told The Epoch Times.