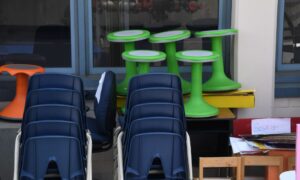 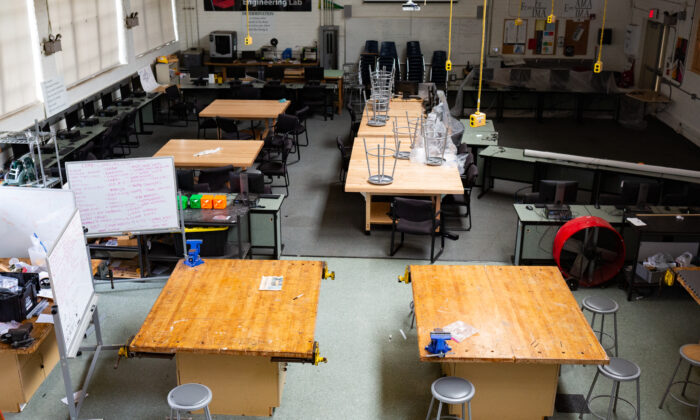 LOS ANGELES—A tentative deal with the teachers union that would restart in-person instruction for Los Angeles Unified District (LAUSD) preschool and elementary students by mid-April was approved March 11 by the district’s Board of Education.

After a roughly two-hour question-and-answer session focusing on the mechanics of the agreement and anticipated structure of school days, the board unanimously OK’d the pact with United Teachers Los Angeles (UTLA).

The deal still needs to be ratified by UTLA’s membership, with voting expected next week.
“It has been a long, long 361 days, I believe, since school facilities were closed back in March,” Superintendent Austin Beutner said March 10.

“And our goal since then has been the same. It never wavers—to reopen schools as soon as possible and in the safest way possible.”

The tentative agreement announced late March 9 ended a tense few weeks, during which UTLA members overwhelmingly supported a statement saying they would not return to in-person classes until three conditions were met, most notably COVID-19 vaccinations for all school staff.

But with the governor earmarking 25,000 doses of vaccine for the LAUSD, and Los Angeles County’s COVID case rates dropping to the verge of moving into the less-restrictive “red” tier of the state’s economic-reopening blueprint, pressure mounted for a return to class.

Given the vaccination schedule, the goal is to have elementary students back in classrooms by mid-April, although an exact date has not yet been set.

The county Department of Public Health had already approved the district’s COVID Safety Plan, a required document outlining safety measures being implemented at schools to protect students and staff, leaving the stalemate with the teachers’ union the only remaining roadblock to reopening.

But that roadblock was removed with the tentative labor agreement.

“Today we start a new chapter of public education in Los Angeles, one of collaboration, of accountability and resolve,” UTLA President Cecily Myart-Cruz said March 11.

She said the agreement moves the district “one step closer to our new normal.”

While hailed as a return to classes, the agreement actually proposed relatively limited face-to-face interaction between students and teachers, with elementary students returning to campus for three hours of instruction, either in the morning or afternoon, in alternating groups. Students will have the option of being on campus for the full day, but half the day would be spent in activities overseen by non-teachers.

All students will continue to have the option of remaining with solely online learning.

Under state guidelines, Los Angeles County schools can reopen for students in pre-kindergarten through sixth grade. Students in grades 7 through 12 can return to in-person classes once the county advances to the “red” tier of the state’s economic reopening blueprint. That could happen as soon as this weekend.

The tentative agreement would maintain online instruction for secondary students, but they will have the chance to return to campus for “peer interaction, social-emotional learning and lessons for college and career exploration.”

Gov. Gavin Newsom recently signed a $6.6 billion legislative package providing funds to schools throughout the state to help recoup learning lost during the pandemic, which has forced students into online-only instruction.

The package includes $2 billion in incentive funds for schools that resume in-person instruction for students in pre-kindergarten through second grade by April 1. Schools that fail to reopen by that date will lose 1 percent of their share of funding for every day they miss the deadline.

Newsom, during a visit to a mobile vaccination clinic in South Gate on March 10, hailed the agreement between LAUSD and teachers as a major advancement in resuming in-person classes in the state.

“We are very pleased to hear the progress, very grateful for the hard work that was done on both sides to advance the cause of getting our youngest kids back into in-person instruction sooner than later,” Newsom said.

“We’ve been working as you know for many, many months to get to this place, not just LA Unified, but districts all up and down the state.

“This is real progress and it’s very encouraging, not only to parents … but to all of us that recognize the urgency, the social-emotional side of this conversation and debate,” he said. “It’s not just an academic issue.

“It’s about those rights of passage. It is about the mental health and well-being of our kids.”