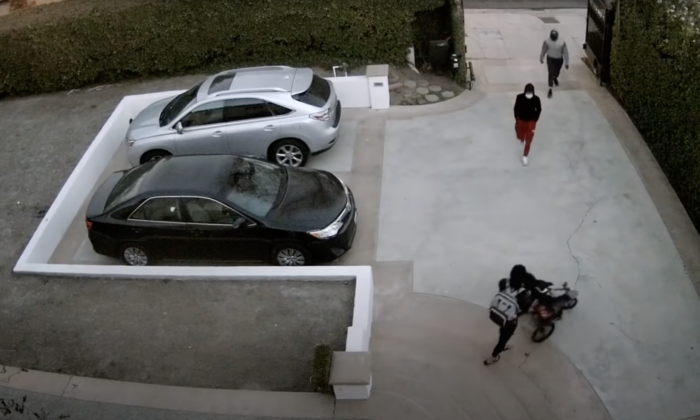 A screenshot of security footage of a daytime robbery in Hancock Park, Calif., on Nov. 28, 2021. (Courtesy of the Los Angeles Police Department)
Southern California

LOS ANGELES—While robberies overall have decreased by 12.7 percent this year compared to 2019, last week had the highest number of robberies for the entire year, with about 200 reported, Los Angeles Police Chief Michel Moore said Dec. 7.

The vast majority of the reported robberies were street robberies, Moore added.

“We’ve seen in September, October and November instances of robberies increase, particularly the percentages of those robberies being committed by individuals with handguns or firearms,” Moore said.

Overall robberies are up 4.7 percent compared to 2020, but Moore indicated that number could be considered as an anomaly.

“Now we still are 12.7 percent fewer robberies overall in the city than we did from two years ago, recognizing that the COVID years, for lack of a better term, last year was a bit of an outlier on a number of factors,” Moore said.

Moore also said the department expects to have recovered 9,000 firearms in 2021 by the end of the year, “which will be a significant number higher than any of our previous years in recent memory.”

Homicides have risen from 317 last year to 361 during the same period this year, increasing by 49.2 percent over a two-year period, he said.

Aggravated assaults have increased 8 percent this year compared to last year, and 16.4 percent over a two-year period.

“This is a city of 4 million in a region of 10 million, so the vastness of it, people need to recognize that the vast majority of Angelenos are safe, but they need to exercise good preventative measures,” Moore said.

Noting a series of smash-and-grab robberies and follow-home robberies that have been reported in recent weeks in Los Angeles, Moore said people should be careful wearing expensive jewelry, driving expensive cars, and leaving high-end places, because people may be targeting them for robberies.