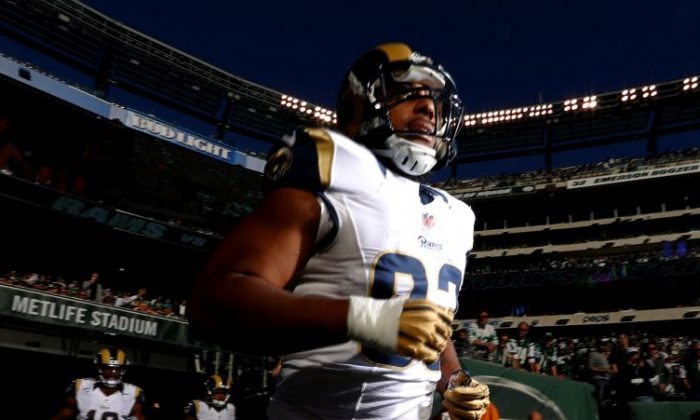 Ethan Westbrooks #93 of the Los Angeles Rams takes the field before the game against the New York Jets at MetLife Stadium on November 13, 2016, in East Rutherford, New Jersey. (Photo by Al Bello/Getty Images)
Entertainment News

The 26-year-old–who played college football at West Texas A&M University and signed with the Rams in 2014—was arrested at a traffic stop along Interstate 5 west of Bakersfield, California. He was stopped after an officer noticed him speeding.

The officer then spotted a handgun in his vehicle and found that it was loaded. The handgun was reported stolen in 2009, The Associated Press reported.

After that, he was arrested without incident. He was taken to the Kern County Jail Receiving Facility in Bakersfield before being released.

His arraignment is scheduled for Oct. 5.

“I can’t talk about it because it’s a legal issue,” Westbrooks said on Monday after team practice, reported the Los Angeles Times.

The Rams had no immediate statement on the arrest, but Westbrooks said that he had spoken to Rams coach Sean McVay about it.

“He said he was behind me, the organization is behind me so that’s pretty much it,” Westbrooks told the LA Times.

Coach McVay had told the team that he warned players to “protect the team” by not being involved in off-the-field incidents, such as arrests.

Earlier this year, in March, he was arrested in Sacramento on suspicion of domestic violence. The Sacramento County district attorney declined to file charges, however.

He’s played 53 games with the Rams. It’s unclear if he’ll face a team or league suspension.

In five games this season, he had one sack and five tackles. SBNation wrote that he would be the Rams’ “breakout star” this year.

The Rams play the Dallas Cowboys on Sunday.