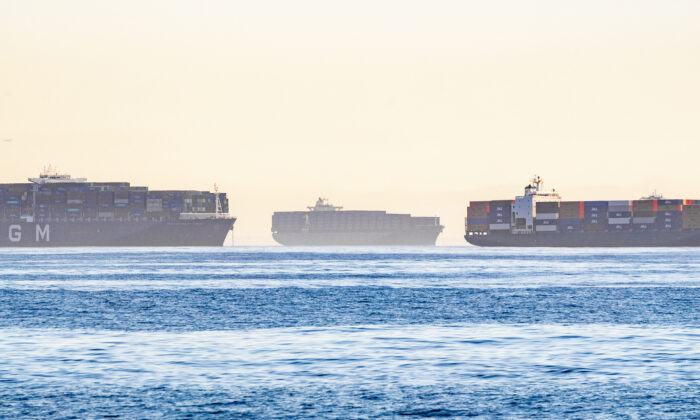 Cargo volumes at the Port of Los Angeles broke another record in March as the docks processed nearly 1 million containers.

“This turned out to be the third-best month overall in the port’s history,” the port’s Executive Director Gene Seroka said at a press conference April 13. “We started out here in 2022 with three consecutive record months, and our best first quarter ever, eclipsing the previous records set just last year by 3 and a half percent.”

The 958,000 containers processed at the port last month edged out the record set in March 2021, Seroka said.

The port processed nearly 2.7 million containers in the first three months of this year.

The flow of imports into the port remains strong as retailers continue to replenish inventory and satisfy the demands of the American consumer, Seroka said.

However, exports decreased again last month. The port processed about 11,700 containers for export to Asia and other international destinations, which was about a 9 percent drop from the same time last year.

Exports have now declined 37 of the last 41 months in Los Angeles, Seroka said. The port exported about 352,000 empty containers, a 2 percent increase.

Seroka has previously called for a national export policy and is continuing to work with U.S. agriculture groups and the manufacturing community to improve exports, he said.

“This is going to be an important part of our post-COVID economic plan,” Seroka said. “We continue to work with the Biden and Harris administration and senior cabinet officials to get this done.”

The Los Angeles port continues to process a backup of empty containers stored at the terminals and in nearby lots.

To get empty containers moving, the port created a program in December 2021 to penalize ocean carriers by charging them $100 per empty container fee for operators, but the program has not yet started.

The Los Angeles Harbor Commission voted in January to delay the program until April 29.

Seroka has the authority to implement the fee but he has not yet used the commission’s authority to trigger it, according to a port statement.

“That empty dwell fee remains in place if we need it, but we haven’t yet,” Seroka said.

The Port of Los Angeles announced a similar program on Oct. 25 for lingering import containers. The Port has delayed enacting the import container fee but has seen a rise recently in the number of containers left at the port more than nine days, Seroka said.

Both fees remain an option, according to Seroka.

“As a last-ditch effort, if that fee is necessary to get people motivated, we may just have to use it,” Seroka said.

To help speed up container movement, the port is putting all of its focus on increasing rail to transport goods to the U.S. interior, Seroka said.

The Port of Los Angeles is monitoring port closures in Asia, Seroka said.

“We haven’t seen a noticeable impact yet,” Seroka said. “We’re keeping an eye on what’s happening in Central China right now. There are some folks who are not moving cargo as swiftly as normal but nothing that is going to be an absolute drop off the cliff.”

The Chinese government began to slowly ease a citywide shutdown this week in Shanghai, home to the world’s largest port and 17.5 million residents, following an outbreak of COVID-19.

Shipping experts at Sea-Intelligence, a leading provider of research and services to the global supply chain industry, expect traffic to increase at West Coast ports about 40 percent in the next few months.

“With the recent data, we can see a seasonal dip due to Chinese New Year 2022, but it is the increase in March/April 2022 which should be particularly noticed,” according to CEO of Sea-Intelligence Alan Murphy.

“The number of vessels scheduled to depart Asia—and subsequently arrive on the North American West Coast— will increase sharply and surpass a 40 [percent] increase compared to the pre-pandemic normality.

This in itself will add further pressure on the port infrastructure.”

The twin Los Angeles ports were expected to see ships backing up at record levels again by the end of May, but that is unlikely to happen as the industry faces a shortage of container ships, Murphy said.

Instead, concern has shifted to East Coast ports as carriers try to avoid backups in Los Angeles.

“What is more alarming is that there is a 60 [percent] increase in the number of vessels on the Asia-North America East Coast trade lane in the coming months, as carriers try to circumnavigate port congestion on the West Coast,” Murphy said. “This will severely increase pressure on the port infrastructure on the East Coast.”