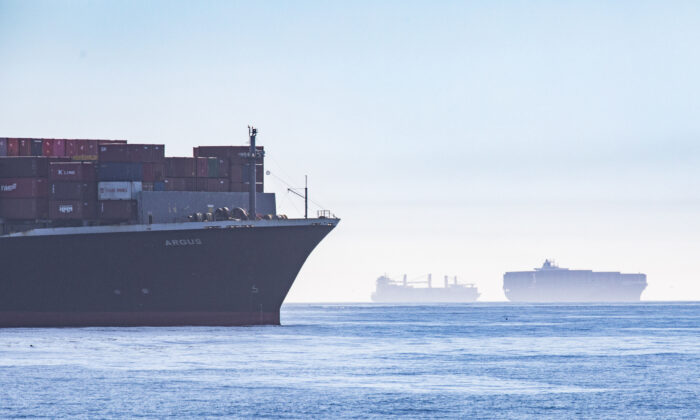 Delays in the transfer of cargo continue in Southern California as vessels line the horizon waiting offload containers into the Ports of Los Angeles and Long Beach, Calif., on Oct. 27, 2021. (John Fredricks/The Epoch Times)
Southern California

LOS ANGELES—The amount of U.S. goods exported by the Port of Los Angeles will hit a 16-year low this year, continuing a four-year downward spiral.

The plunge, Seroka said, was a result of trade policies with China and the strength of the U.S. dollar.

“The strength of the U.S. dollar, which is so important to us at home, makes us less competitive against other trading nations,” he said.

The dollar remained at its highest level since July 2020 this week and economists expect it to continue to rise.

Consumers have purchased a record-number of goods—including cars and electronics—from foreign countries this year than the U.S. has exported, according to the U.S. Commerce Department.

In September, this helped create a record trade deficit of over $81 billion, which was more than $12 billion more compared to 2020.

Exports continued to dwindle even as the LA and Long Beach ports reported record numbers of container ships arriving this week.

On Dec. 15, 102 container ships were backed up and waiting to dock at the twin ports, the Marine Exchange of Southern California reported.

Exports have declined in 33 of the last 36 months. By the end of December, about 1.2 million containers will have left the LA port, which is the lowest output since 2005, Seroka said.

At the Port of Long Beach, exports are down nearly 2 percent, which is 20,000 fewer containers compared to last year.

At the same time, Long Beach reported an 18 percent rise in arriving containers by the end of November.

“The supply chain continues to be under a great deal of strain,” Port of Long Beach Executive Director Mario Cordero said at a different news conference Dec. 16. “We are moving more cargo than ever … We will close out 2021 with another record year.”

The LA port is on track to break a new import record this year of 5.5 million containers.

Both ports continued to struggle this week with an overload of empty containers.

Officials are continuing to work with shippers to order more sweeper ships to clear the terminals of the “empties.”

Five more sweeper ships are headed to the port next week to take 15,000 more away, Port of LA Spokesman Phillip Sanfield told The Epoch Times in an email.

“We’re urging shipping lines to bring in more and larger ‘sweepers’ to help clear out the backlog,” Sanfield said.

The LA port expects to close out December with an 11 percent increase in empty containers. About 70,000 are being stored at the terminals and near dock depots, the port reported.

Empty containers have taken up storage space inside the terminal and in nearby neighborhoods as some truckers have parked them on the side of the roads. Officials are looking at ways to reduce the numbers.

Long Beach has seen 32 percent more empty containers this year, according to data on the port’s website.

“We will look at additional measures, including levying fees to liner companies,” Seroka said.

A similar fee was approved by both ports in October to penalize operators who leave full containers at the port for extended amounts of time.

That fee charges companies $100 each day a container is left for more than nine days, if it is being shipped via truck, and six days if headed out by rail. The fee compounds by $100 each day.

Those fees have never been enacted, however. Port officials again delayed their start this week to Dec. 20.

The threat of the fee has reduced containers by 39 percent, according to Seroka.

“If we go backwards, you bet, it will be implemented,” he said.

The ports are additionally working with a digital software company called UNCOMN based in St. Louis, Missouri, to create a so-called “Supply Chain Information Highway,” according to Long Beach’s Cordero.

The new system will enable shippers to track their shipments from the point of origin and across the supply chain to the “last mile and perhaps even beyond,” he said.

Officials hope to roll out the software in February and eventually expand it for use in Oakland, California, and eventually at other ports across the country, Cordero said.

Port officials have invested $400,000 in the system’s concept and will offer it free to users, according to Noel Hacegaba, another Port of Long Beach high-ranking executive.

“Our goal in working with UNCOMN is to make a tool that will enable our partners to schedule and plan prior to cargo arrival and reduce delays during each handoff between modes of transportation,” Long Beach Harbor Commission President Steven Neal said in a press release.

UNCOMN has worked for more than 10 years for the Department of Defense’s U.S. Transportation Command, U.S. Army Surface Deployment, and Distribution Command, and U.S. Air Force Air Mobility Command in data analytics and cloud application and data environment development, according to the Port of Long Beach.