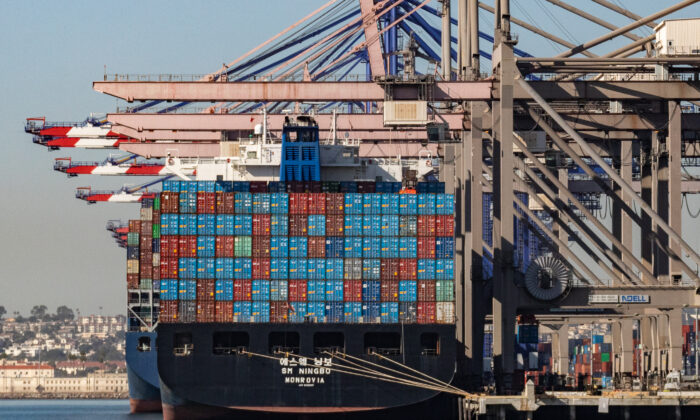 LOS ANGELES—The Port of Los Angeles said on Oct. 22 that the cargo surge in 2021 will likely affect air quality and pollution levels at and around the port.

“Operational efficiency benefits both business and the environment,” Port Director of Environmental Management Christopher Cannon said. “The heavy volume of inbound cargo has led to disruptions across the supply chain, and those impacts will be reflected in next year’s [Inventory of Air Emissions report].”

President Joe Biden announced on Oct. 13 that the port would begin operating 24 hours a day, seven days a week as part of a push from the White House to clear supply-chain disruptions threatening the holiday shopping season and slowing the nation’s economic recovery from the pandemic.

The announcement came after cargo ships had been anchored offshore from the Port of Los Angeles and the Port of Long Beach for weeks waiting to enter the facilities. On Oct. 20, there were 70 ships waiting to get into one of the ports.

The pollutants at the port were slightly reduced in 2020 compared to 2019 during an unprecedented pandemic year in which cargo volume both plunged and surged, according to the Port’s Inventory of Air Emissions for 2020.

Cargo surged in the third quarter by more than 50 percent for the remainder of the year, but the total cargo volume for the year was slightly lower than in 2019.

The year 2020 finished as the fourth-busiest year in the port’s history, with more than 9.2 million 20-foot equivalent units moved in 2020.

The reduction in cargo offset in the beginning of the year offset the emissions increase during the second half of the year, the port said.

“The tremendous drop in emissions during the first part of 2020 offset the increase at the end of the year,” Cannon said. “The cargo surge has continued well into this year, so we expect to see an increase in emissions for calendar year 2021.”

The port also attributes the 2020 reduction in pollutants in part to high compliance with mandatory and voluntary pollution control reduction programs, including switching to cleanest-available low-sulfur fuel, using incentives to attract cleaner, newer ships to the port, and plugging most container, refrigerated cargo, and cruise ships into shoreside electrical power at berth.

The pandemic’s shutdown of cruise operations, which began on March 15, 2020, also reduced emissions, as did a reduction in ferry and excursion boats.

The port said that 40 percent of the trucks in the drayage fleet are either from 2014 or newer, and they’re cleaner and more efficient than older models.

The port aims to eliminate tailpipe emissions from drayage trucks by 2035.

Emissions fluctuate annually at the port, and in 2020, greenhouse gases decreased by 12 percent.

“The technology that reduces particulate matter and nitrogen oxides can sometimes increase greenhouse gases,” Cannon said. “This makes our zero emissions demonstration projects all the more critical because they reduce both criteria pollutants and greenhouse gas levels.”