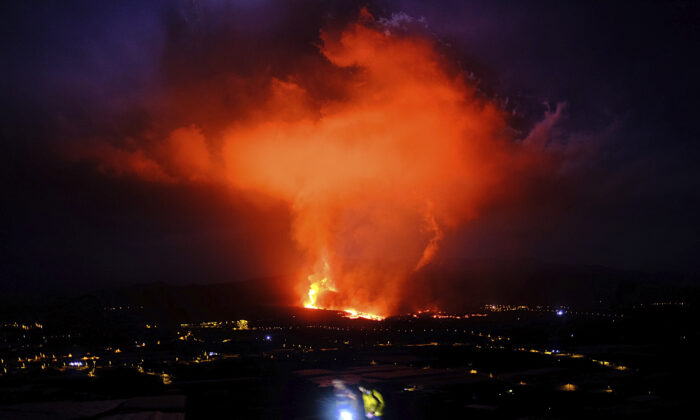 Two people walk as lava spews from a volcano on the Canary island of La Palma, Spain, in the early hours of Sept. 25, 2021. (Daniel Roca /AP Photo)
Europe

MADRID—Flights to and from the Spanish island of La Palma were canceled Saturday because of an ash cloud spewing out of a volcano that has been erupting for a week.

La Palma Airport operator Aena said on Twitter that plane traffic was suspended “due to the accumulation of ash” in the air. The company said other airports in the Canary Islands were still operational.

La Palma is one of the seven islands that make up the Spanish archipelago in the Atlantic Ocean. The volcanic eruption that started last Sunday is the first in 50 years on La Palma, which has a population of about 85,000.

The intensity of the volcanic eruptions has increased in recent days, prompting the evacuation of three additional villages on the island. Almost 7,000 people have had to leave their homes.

Emergency crews pulled back from the volcano Friday as explosions sent molten rock and ash over a wide area. Lava flows have destroyed hundreds of buildings on the island’s western side.