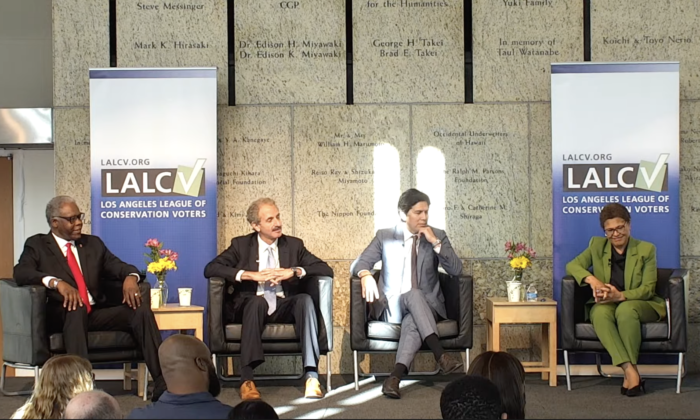 LOS ANGELES—Environmental issues are on the forefront of some Los Angeles voters’ minds, according to a coalition of climate activists in the city.

While a few frontrunners were missing from the debate—specifically Rick Caruso—Karen Bass (D-Calif.), LA City Attorney Mike Feuer, LA Councilman Kevin de Leon, and former LA Metro board member and real estate agent Mel Wilson were on hand to give their thoughts and solutions on air and water quality, affordable housing, and public transportation.

With an emphasis on moving forward the city’s Green New Deal—which aims to have 100 percent renewable energy by 2045—the candidates discussed how a push toward “clean energy” will create new green jobs and make public transportation easier for Angelenos.

A key issue, raised by moderators during the hour-long panel, was Angelenos’s desire, based on recent polling, that thew citymove toward eliminating fossil fuels and transition to renewable energy to reduce pollutants.

Bass said she would move toward electrifying the port operations “considering that [it] is responsible for 40 percent of the goods that traveled through the country.”

In January, the Port of Los Angeles and the Port of Shanghai announced a partnership project to reduce greenhouse gas emissions between the transportation of cargo through transitioning to zero-carbon ships by 2030.

Feuer said he would expand the project that will have “clean tankers” enter the LA region, or zero-carbon ships.

“When it comes to other sources of air pollution here, like water and power sources of pollution, we have to be converting from natural gas which is still a fossil fuel into clean sources of energy in each of our communities,” he said.

De Leon said he would implement decarbonization, the reduction of carbon output from modes of transportation, in all the city’s buildings and convert the public transportation system to align with the city’s green goals.

“We need to electrify the entire fleet of the City of Los Angeles, all of our cars and City Hall as well as our metro fleets,” he said.

To increase affordable housing, Wilson said the city should build more along transit corridors, an initiative that began in 2016, and he would, if elected, ensure more environmental studies were conducted.

De Leon said the process for getting development permits approved needs to be streamlined to make new construction quicker. He additionally said the city should require that new developments are affordable.

“We also have to mandate affordability,” he said. “If you don’t … the market forces don’t make it happen.”

Feuer floated the idea of using “underutilized school sites” that have popped up after the pandemic with the shift to online learning that could be converted to affordable housing.

Reclassifying buildings to another use, known as “adaptive reuse,” “is a way to concentrate more housing in our urban core,” Feuer said, “[and] an idea that I’m going to dramatically [expand].”

Aside from building more housing, Bass said there needs to be a shift in perspective from Angelenos who have a NIMBY—short for “not in my backyard”—attitude toward housing the homeless and low-income residents.

“The only way this is going to be solved is if we all come to the table together and recognize that this is a problem that the city, the county, the state, and the federal government have to work on,” she said.

She also proposed a similar process to streamline development permits like De Leon.

“[T]here’s too … much bureaucracy that [builders] have to go through,” she said. “They’ll all tell you, they can go to Downey and get something built, but when it comes to getting something built in LA, it’s a huge hurdle.”

Candidates additionally discussed ways they would improve the city’s bus and metro system, especially delays in getting people around.

Feuer, the current city attorney, said “there are a number of transit dependent people living in our community for whom buses aren’t working well.”

De Leon took a different approach and said there needs to be more push from the city to encourage middle class Angelenos to ride in buses and trains, too.

Wilson, instead, zeroed in on concerns regarding public safety on buses and trains.

“Gas prices are at $5 a gallon or more, and people are not rushing to public transit. Why is that? Because it’s not safe,” Wilson said.