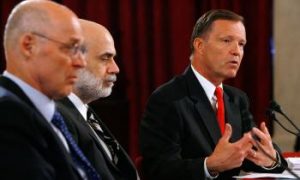 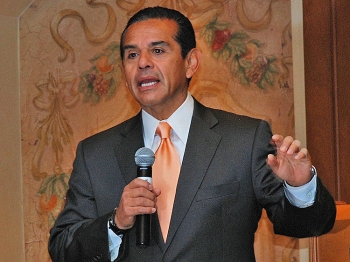 LOS ANGELES—Mayor Antonio Villaraigosa described how he wants to improve schools in his sixth State of the City Address at Jefferson High School last week. He wants more freedom for teachers and more freedom to get rid of teachers. He said schools need both better funding and more flexibility.

“Now is the time to challenge the status quo by putting teacher effectiveness at the forefront of our educational agenda,” said Villaraigosa.

He said he wants to empower teachers by allowing them more freedom to design their own lesson plans than they have now. At the same time, he proposes to rate them based on student grades. Teacher effectiveness in the classroom will be measured by student achievement in the mayor’s plan. Students’ grades should be improving or meeting the minimum requirements set forth by the school district.

Schools that are not performing could be rated as failing schools, as was Jefferson High School.

Retention of teachers in the past was partially based on the seniority system, one where teachers’ seniority was more important that their performance in the classroom. The mayor said his proposed change would allow schools to lay off ineffective teachers and hire or retain more effective teachers.

LA schools had a 50 percent high school dropout rate; 70 percent of 13-year-olds were not reading at grade level; and three out of four students were not proficient in math, he said in a press release.

LA developed a plan to turn around failing public schools. The city has been using it for three years.

The Public School Choice Program allows charter schools, nonprofits, teacher groups, and other organizations to compete for contracts to take over and operate schools designated as failing. In its inaugural year, 36 schools went through the Public School Choice process. Another 13 schools participated in the second round, and in the third round, 43, bringing the total to 92 schools.

Villaraigosa stated that Jefferson High School benefited from the Public School Choice initiative. Jefferson competed in the initial Public School Choice competition. The operation of Jefferson was handed to an “internal team of operators committed to data-driven accountability, regular classroom observation, and a curriculum that stresses college preparedness,” he said in his speech.

The result was that “Jefferson is now run as five small schools, each with its own educational focus area.” He said breaking the school into small, focused schools gives students a better environment and more individual attention from teachers, and the changes raised “Jefferson’s Academic Performance Index (API) score by 33 points.”

Regarding taxes and financing education, Villaraigosa said, “Los Angeles currently ranks 47th in the nation in per-pupil spending and is last in terms of student ratios for teachers, guidance counselors, and librarians.”

The mayor pledged his support for Gov. Jerry Brown’s tax extension plan, which will give California voters the opportunity to generate more revenue for schools by extending existing taxes that are due to expire. These taxes include sales, income, and vehicle taxes.

He also announced the formation of the “LA Fund for Public Education,” a public/private partnership to raise “per-pupil funding, the development of a leadership pipeline, and promoting the arts.”

Villaraigosa concluded: “This is our opportunity for reform. Let’s seize it together. Our kids are counting on us.”