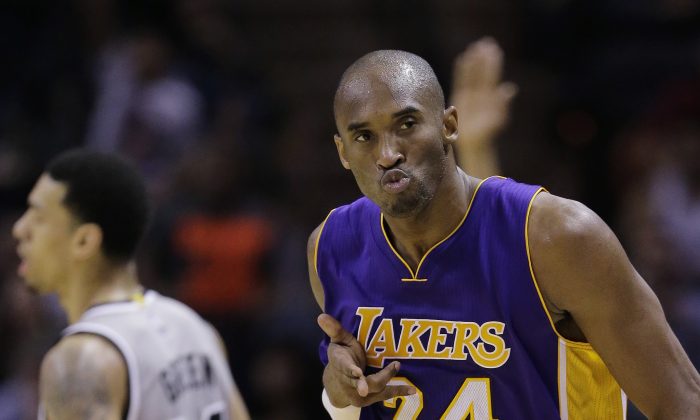 The Lakers beat the San Antonio Spurs on Saturday, and they’ll play the Minnesota Timberwolves on Sunday. Here’s some of the latest updates:

Kobe goes off in practice

Kobe Bryant described his Lakers teammates as “soft” at a recent practice this week.

Bryant had not been at practice this month until Dec. 11.

Nick Young also told Bryant: “Nobody in the world can guard me one-on-one,” to which Bryant replied: “You’re going exactly where I want you to go.”

Coach Byron Scott has held Bryant out of the majority practices this season.

He elaborated to ESPN on what he said.

“No, I was just being myself,” Bryant said. “I don’t know if it helps them, but it obviously raises the intensity level. It was a tough practice for them … It’s really good for Nick, aside from the fun of bantering back and forth and the trash talk, just fundamentally some of the techniques and things that I use. He gets a chance to really see up close those little tricks.”

For his trash-talking, Nick Young later erupted in an overtime game against the San Antonio Spurs.

Before that Young, made a couple nifty moves.

As this Vine video shows, even Bryant was impressed:

Coach Byron Scott spoke positively about the practice with Bryant.

“I think he brings out the best in the guys. It’s a good way to start the trip … I don’t think anything irritated him. I just think he did a great job of getting everyone else fired up,” he told ESPN.

“He’s always fired up. That’s the great thing about him. He’s such a competitor. When he comes out here the intensity level in practice goes sky high and he challenges guys, which is what you should do,” Scott added.