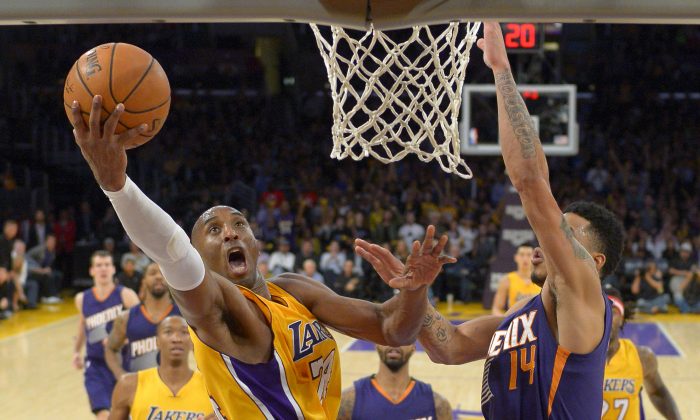 The 1-8 Los Angeles Lakers don’t appear to be getting better anytime soon, and here’s some of the latest buzz:

Both Jordan Clarkson and Xavier Henry were sent to the NBA’s Development League.

According to the Los Angeles Times, “Both are expected to rejoin the Lakers when they host the Golden State Warriors on Sunday at Staples Center — giving the pair a rare chance to play three games in three nights.”

Henry is trying to get back into playing form after knee, back, and wrist injuries.

Kobe has ‘worst game of career’ vs Spurs

During the San Antonio Spurs drubbing of the Lakers Saturday night, it was noted that Kobe Bryant had possibly the worst game of his career.

“I didn’t feel too good, but I’m used to playing through that. It’s tough, man. Tonight was just one of those nights where it makes me really remember the challenge of being 36 and being 19 years in. Body just won’t respond when you’re sick and you’re used to being able to fight through those things. It just helps me really remember exactly what I’m facing. It’s tough,” he told the LA Times.

He added: “Nineteen years. That’s what’s different. In all honestly, it’s a long season. I feel great. But tonight was one of those nights where it just caught up. I gotta try to now look at how to adjust — you know, recovery program — to try to answer the call, try to answer the challenge when I face a night like tonight in the future.”

Kevin Love of the Cleveland Cavaliers recently addressed rumors that he would like to play for the Lakers following the end of the season.

Love told CBS on Friday: “Going to the Lakers, I don’t know where someone got that.”

A report on Bulls.com suggested that he would be interested in the Lakers.

However, with the current state of the team, it’s highly unlikely.