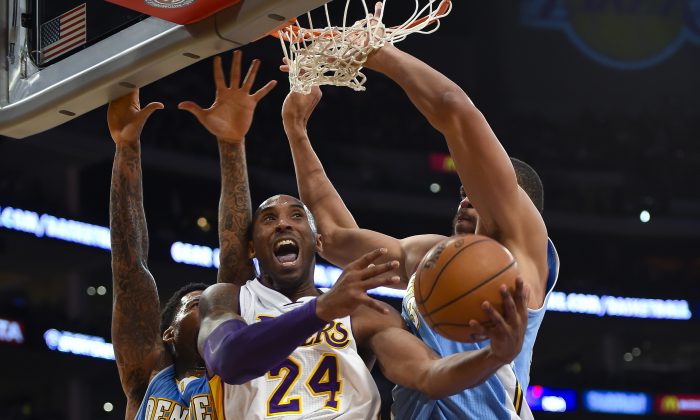 The Los Angeles Lakers are coming off a tough win and still trying to put all the pieces together to compete in the tough Western Conference.

Kobe Bryant discussed his chemistry with starting point guard Jeremy Lin after the overtime loss on Sunday, saying everything is goign pretty well.

“He and I are playing two-man action a lot and trying to take advantage of the defense that way,” Kobe told Lakers Nation.

“Although Kobe and Lin are still figuring out each other’s style, the two are starting to develop nice chemistry on the court. Earlier this season that bond did not seem to be there, but as the season progresses the two are beginning to get on the same page. In order for the Lakers to advance as team and possibly make a push for the postseason, the team will need to have their starting backcourt in sync,” the blog noted.

Nick Young’s return helped the Lakers get two wins but Young wants to be more involved, particularly at the end of games.

Young said that he’s “got to demand getting the ball more himself toward the end,” Serena Winters of Lakers Nation said.

Lin discussed Kobe’s role at the end of the game, calling it a “tough” issue.

“It’s a balance and I think we’re a lot closer towards that balance than we were maybe in the beginning.”

The Lakers announced Henry’s injury Monday, and the team believes the tendon is torn.

Henry underwent an MRI exam to confirm the tear and sources later told Yahoo that he’ll be out for the rest of the year.

Henry has played in nine games for the Lakers this season, his second with the club. He struggled with an injury to his surgically repaired knee throughout the preseason, undergoing treatment in Germany to speed his recovery.

Henry was limited to 43 games with Los Angeles last year after injuring his knee in December. He also had surgery on his left wrist during the offseason.

Smith May Get Called Up

Roscoe Smith, who is playing for the D-League’s Fenders, may be called up to the Lakers.

Shams Charania of RealGM reported recently that the Lakers were set to bring Smith in for a workout.

Smith is a lengthy and athletic swingman who stands 6’8″. He played at the University of Connecticut for two seasons but his one year at UNLV was his best. He averaged 11.1 points and 10.9 rebounds.

The Lakers are thin at the forward position with the injuries to Randle and Henry, and Ryan Kelly.

“He like Roscoe. He’s lively. He’s a good rebounder and he runs the floor well. He’s picked it up in the last two weeks,” Kupchak told the Las Vegas Review Journal.

Then again, David Pick of Eurobasket says that despite the slew of workouts the Lakers have been holding–they’ve brought in about half-a-dozen players recently–the team isn’t planning any immediate moves.