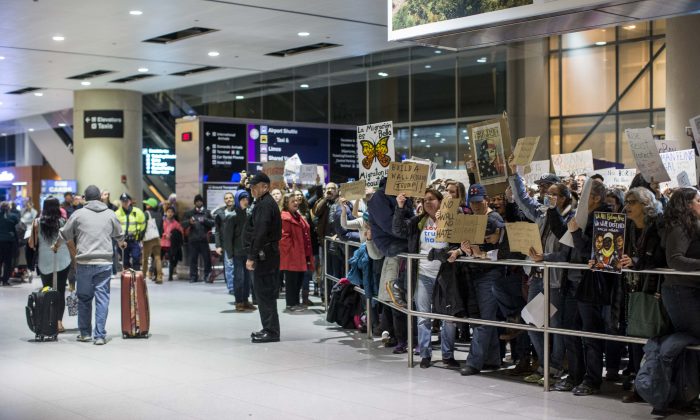 Passengers arrives during a demonstration against the new ban on immigration issued by President Donald Trump at Logan International Airport in Boston, Massachusetts on Jan. 28, 2017. President Trump signed an executive order that halted refugees and residents from predominantly Muslim countries from entering the United States. (Scott Eisen/Getty Images)
US

A federal judge in Los Angeles has ordered the U.S. government to allow people holding immigrant visas from seven majority-Muslim nations into the United States despite President Trump’s executive order banning them.

In a temporary restraining order issued late Tuesday, Judge Andre Birotte Jr. ordered the government not to cancel any validly obtained immigrant visas or bar anyone from the seven nations holding them from entering the U.S.

But it was unclear whether the order will have any effect. The State Department ordered all visas from the seven countries revoked on Friday, and the government has maintained that orders similar to Birotte’s do not apply because the visas are no longer valid.

The State Department declined comment Wednesday on Birotte’s order, saying it does not comment on pending litigation.