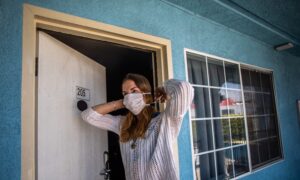 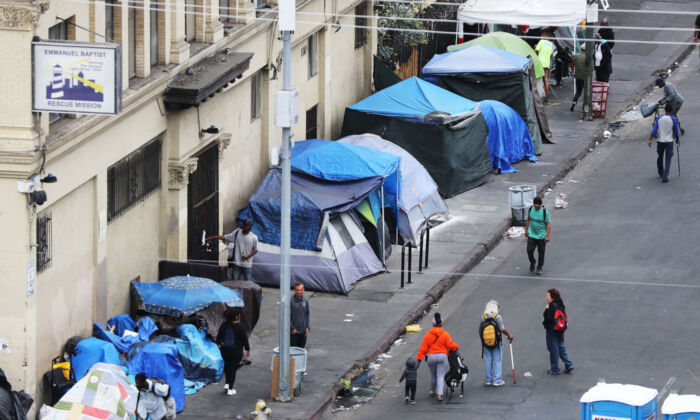 In Los Angeles, taxpayers have supported measures in recent years to dedicate billions of their dollars to helping the homeless. Yet, since these measures were enacted, the homelessness problem has worsened, says local 30-year veteran journalist Jerry Sullivan.

He has investigated the use of public funds for projects to help the homeless, and concluded that corruption among city officials is a likely reason those funds are leaking away.

He gave the example of a warehouse on Paloma Street in the industrial area of downtown LA being leased by the city to turn it into a shelter. “The city agreed to lease it at a rate that seems to make no sense by any reasonable comparisons,” Sullivan told The Epoch Times.

According to documents he obtained through the California Public Records Act, the city is leasing the warehouse at twice the going rate.

City staff had included in both iterations of the proposal justifications for the price.

City council approved it and the mayor signed it.

“The city does deals like this all the time,” Sullivan said. “I’ve never seen one quite this brazen.”

Though phase one of the project has not yet been accomplished—a year past deadline—the city is looking at phase 2, leasing more property in the same area for three times the going rate, Sullivan said.

“I don’t think I could say it’s evidence [of corruption], because the story isn’t complete yet,” Sullivan said. “I have questions that are unanswered.”

City Councilmember Jose Huizar is currently under federal investigation for alleged corruption, including massive bribes. He was involved in this deal. Sullivan expects it to be a while before that investigation answers all the questions publicly. In the meantime, he said, more of the same continues in the city.

From what Sullivan has observed while covering local news for decades, Huizar represents the extreme of something that happens in a quieter way all the time in city politics.

The case of Huizar is “what it looks like when it gets out of control,” Sullivan said. “People got greedy, and they got sloppy.”

There are also many ways that a politician can be influenced that are perfectly legal, he said.

“Most of what we would think of as corrupt, or not right, or unethical, or questionable—most of it’s legal,” he said.

“If the amounts of money had been less, and written to a political action committee or his campaign or within limits, there would be nothing illegal about that,” Sullivan said. “It’s long been a practice that if you have a business up before the council, you might want to write some donations.”

Sullivan has looked into the organization contracted to manage the developing homeless shelter on Paloma Street. Looking at the organization’s tax returns, Sullivan said he sees no indication that it has experience with a contract of this size and with managing the number of employees required.

“I’ve been to some of their other facilities, and there’s questionable practices there that I’ve covered,” he said. “That might be another leak of that money.”

He said many media outlets don’t cover the corruption as it’s happening, only once it becomes impossible to ignore, as in the case of Huizar, because of “access journalism.”

Reporters need sources in city government, and they don’t want to lose access to them by being too aggressive. Sullivan said he’s always pursued the story, and if doors are shut to him because of it, he finds another way in.

A city bond measure approved by LA voters in 2016 raised $1.2 million to build 10,000 housing units for the homeless. The costs have mushroomed, with a single unit costing as much as $700,000, and the already modest goal (10,000 units only covers about a quarter of the city’s homeless population) has been diminished.

Sullivan said the cost is high because it’s not just about the structure itself, but costs related to educating the public about the units built in their neighborhoods, zoning, design, and other “soft costs.”

A county-wide measure increasing sales tax by a quarter of a cent at the same time was estimated to raise $335 million per year for 10 years, totaling billions.

Yet according to the Los Angeles Homeless Services Authority, homelessness is up more than 40 percent, both in the county overall and within city limits, since 2016.

Walking down the street in LA, Sullivan said, you can see the size of the encampments growing, and they’re becoming more permanent in nature, with “crude building going on.”

You’re seeing it “in neighborhoods that have never really encountered this before, so [there is] some sign of spread.”

He said this could have two detrimental effects on the city as a whole: it can deter tourism in the city, and also “fast-track” the “hollowing out of the middle class.”

While expressing sympathy for the people living on the streets, Sullivan said the fact is they also pose a threat to communities. The encampments have a lack of sanitation and medical care, and many inhabitants have mental disorders.

It’s already expensive for the middle class to live in LA, Sullivan said, and if we “now make the neighborhood rougher—people will leave.”

His advice to residents: “If you live in Los Angeles, I would ask my councilmembers for a clear account of what’s being done in this district about housing and tell me about the money behind it. How much came in, how much came out, what was accomplished?”