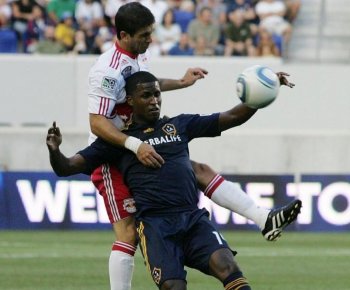 Mike McCaw
View profile
Follow
biggersmaller
Print
The Los Angeles Galaxy defeated the New York Red Bulls 1–0 in front of a sell out crowd on Saturday night. The Galaxy became only the second team ever to defeat the Red Bulls at Red Bull Arena in Harrison, NJ.

The game-winning goal was scored in the 10th minute by league scoring leader and US national team member Edson Buddle. This was his 13th goal in only 15 appearances for the Galaxy.

The goal came off a nice pass where Buddle came through the middle and was able to beat Red Bulls keeper Bouna Coundoul bottom right.

Offensively, the Red Bulls never seemed to catch their stride. New York could have been better organized. When coach Hans Backe was asked after the game what he would have done differently he replied, “Definitely our passing game” and the “number of chances on goal.”

The Galaxy shut down the Red Bulls high caliber forwards Thierry Henry and Juan Pablo Angel leaving them with few good chances. On 12 shots, they were only able to reach the keeper twice.

“The defense did a good job,” said Buddle on LAGalaxy.com. “I tried to do my part. The defense was solid all night.”

One wondered if the Red Bulls new designated players were at a 100 percent. Rafael Marquez was replaced in the 70th minute with Macoumba Kandji.

Then towards the end of the game Henry stepped of the field to stretch. It looked as if he might not have fully recovered from an irritated groin strain that had originally happened in the Barclays New York Challenge played in late July. Both players have not had much time off given their exertions with Barcelona and in the World Cup.

Chemistry is what might be lacking currently with the Red Bulls. They have two very high profile players that have come to play and win. It takes time to have them get acquainted and create a force to be reckoned with.

“There not a bad team,” Galaxy captain Landon Donovan told newyorkredbulls.com. “It will take them time to gel.”

It was easy to recognize the flaws that the Red Bulls presented, but many things were executed well and the game was a good opportunity for them to gauge their play.

“I’m still rather happy with our performance,” said Backe. “We played rather relaxed and still created a number of chances.”

Up next for the Red Bulls is Toronto FC. The Red Bulls recently played Toronto at Red Bull Arena and won 1–0. This time they will head to Toronto, where Toronto FC has an unbeaten record at BMO field.