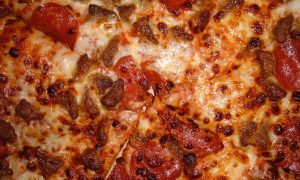 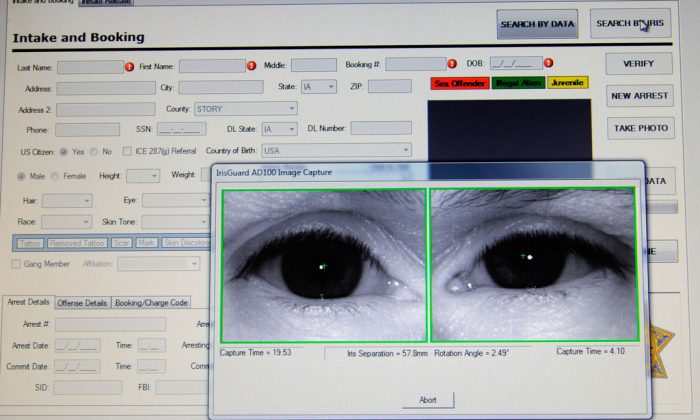 Scans of an inmate's eyes appear on a computer monitor attached to an identification system scanner on Feb. 24, 2010 at the Story County Jail in Nevada, Iowa. (AP Photo/Steve Pope)
US

LOS ANGELES— Once complete, the Los Angeles Sheriff Department’s database of biometric data will be the largest ID system outside of the FBI.

On Tuesday, the Los Angeles County Board of Supervisors approved $24 million in state funds for the LA Sheriff’s Department (LASD) to get new identification technology that would include palm prints, face recognition, iris scans, and voice recordings, in addition to fingerprints.

The money was allocated for the county to use over the next ten years.

Lieutenant Joshua Thai is in charge of implementing the new Multimodal Biometric Identification System (MBIS). He says the Sheriff’s Department will not be collecting data from the average citizen, only those who are booked in a county jail and arrested.

“The fingerprint software does not detect your fingerprints. It really doesn’t know what that is, but there’s algorithms and mathematic calculations based on what you have, and then [you] fuse all that together to get the best score to identify that person,” said Thai.

A person’s identity may also be checked against the database with a mobile device while officers are in the field, similar to fingerprint devices they’ve been using since 2006.

The mobile devices do not have the capability to record the new data and add a person to the database, but such devices do exist, including those with iris and face scan capabilities. Thai says the department has not yet decided which device it will use.

Privacy rights advocates are worried that data may be collected from a person who may not end up being charged for a crime, and that data could be used for any number of things, such as tracking someone’s movement.

In addition, the LA County system will be shared with the the FBI and the state Department of Justice’s identification database.

Some rights groups are also worried that with more law enforcement agencies adopting the use of body cameras, authorities could use facial recognition technology to identify people captured on video.

California law enforcement agencies have already been collecting DNA samples from cheek swabs for felony arrests for about five years. This practice was upheld by the U.S. Supreme Court last year in a 5-4 decision.

“DNA testing of arrestees has little to do with identification and everything to do with solving unresolved crimes,” Steven R. Shapiro, legal director of the American Civil Liberties Union (ACLU) said in a statement in response the Supreme Court decision.

“While no one disputes the importance of that interest, the Fourth Amendment has long been understood to mean that the police cannot search for evidence of a crime – and all nine justices agreed that DNA testing is a search – without individualized suspicion. Today’s decision eliminates that crucial safeguard.”

Peter Bibring, a senior staff attorney with the Southern California ACLU, said that the new LA County identification system may encourage police officers to make more stops in the field to gather info for the new database, reported NBC.

“Sometimes we arrest people, and they don’t use their real name, so by having a better way to identify that person, it will protect the public [from] those that will get their name used by somebody else,” he said.

The technology will be used by all of the approximately 46 law enforcement agencies in Los Angeles County. It will take about 15-18 months to be installed and fully operational.