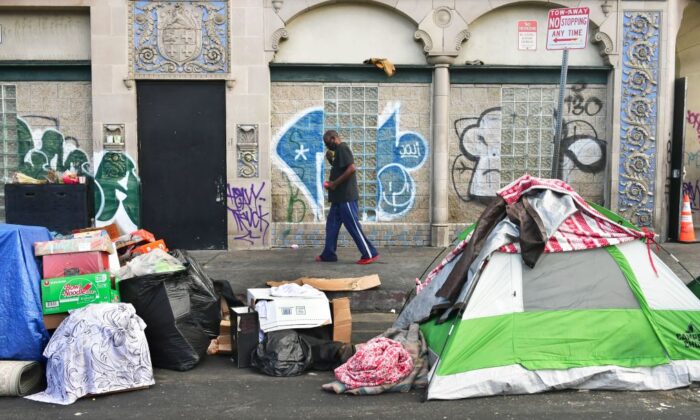 A man walks past tents housing the homeless on the streets in the Skid Row community of Los Angeles, Calif. on April 26, 2021. (Frederic J. Brown/AFP via Getty Images)
Southern California

LOS ANGELES—The Los Angeles County Board of Supervisors voted June 8 to seek more money to support an effort to house more than 600 women and families living on downtown’s Skid Row.

Supervisors Hilda Solis and Holly Mitchell recommended stepping up to assist the Downtown Women’s Center with its “Every Woman Housed” plan for the area.

“Given the surge in domestic violence and the number of women forced to leave the workforce during the COVID-19 pandemic, we expect that the 2022 homeless point-in-time count will show a significant increase in unhoused women in the county,” Solis said. “The county is committed to addressing
homelessness among vulnerable residents like women and children and leveraging resources to secure safe housing options that will keep them off the streets.”

The motion cited a 2019 assessment by the Downtown Women’s Center that found roughly 41.3 percent of chronically homeless women sleep most frequently on the streets.

Living on the street only increases the probability of further assaults and trauma.

The motion calls for rallying 200 landlords to provide rapid rehousing, finding more funding and housing vouchers for hundreds of homeless women, and linking them to mental health and substance abuse treatment programs.

In addition to single women, the plan is meant to address placement options for 55 unhoused families on Skid Row.

“This is a critical first step toward fully addressing the needs of women living on Skid Row, who are disproportionately Black women and survivors of domestic violence and trauma,” Mitchell said. “Effectively solving this crisis will require multiple programs and strategies tailored to the different
needs and realities of people experiencing homelessness.”

The number of women experiencing homelessness has increased by nearly 70 percent since 2013, from 12,449 to 21,129 in 2020, according to the 2020 Greater Los Angeles Homeless Count. The overall homeless population grew by 14 percent over the same time period.

While Black women make up less than 9 percent of all women countywide, they account for nearly one-third of the region’s unhoused female population.

The vote comes as the county and city of Los Angeles continue to challenge a judge’s order to provide housing for everyone living on the streets of Skid Row by October.