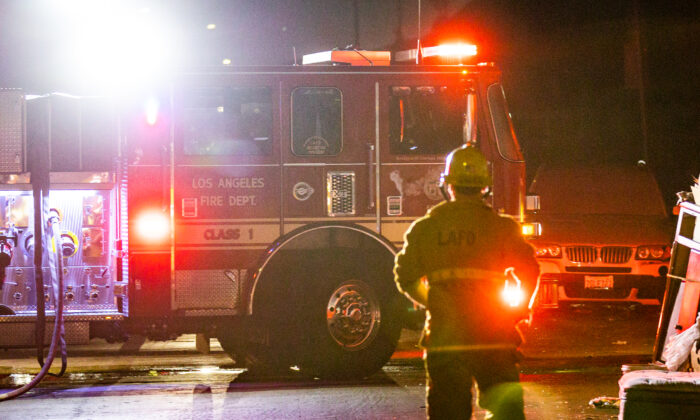 LOS ANGELES—Los Angeles County Firefighter Jonathan Flagler died of a heart attack after running out of air while battling a house fire in Rancho Palos Verdes earlier this year, and he also had methamphetamine in his system, authorities said on April 13.

Flagler, 47, was among crew members from Fire Station 83 who responded to the blaze at a one-story home in the 30700 block of Tarapaca Road around 2 a.m. on Jan. 6.

“The smoke and the fire overcame [the firefighter],” interim county Fire Chief Anthony Marrone told reporters in January. “He put out a ‘mayday’ for assistance from the other firefighters that were at the scene, and they were able to quickly locate him, rescue him and start the life-saving procedures as necessary.”

Flagler was taken to Harbor-UCLA Medical Center in Torrance, where he died.

Methamphetamine was found in his system, and COVID-19 was listed as a “significant condition” in his death, according to the Los Angeles County coroner’s report, which was first obtained by NBC4.

An after-action review of the fire found several errors in the manner the blaze was fought and managed, NBC4 reported, including the fact that Flagler was left alone inside the home after an initial fire in a bedroom was extinguished. The review also found that other firefighters at the scene did not immediately hear Flagler’s calls for emergency assistance.

Flagler’s wife and children are planning to file a lawsuit against the county for the alleged errors.

“Our lawsuit will establish that the tragic death of Los Angeles County Firefighter Jonathan Flagler was caused when on-scene commanders failed to keep track of the firefighters inside the burning residence, maintain radio contact with those firefighters, and promptly rescue Jonathan,” said Thomas Johnston, an attorney for Flagler’s family.