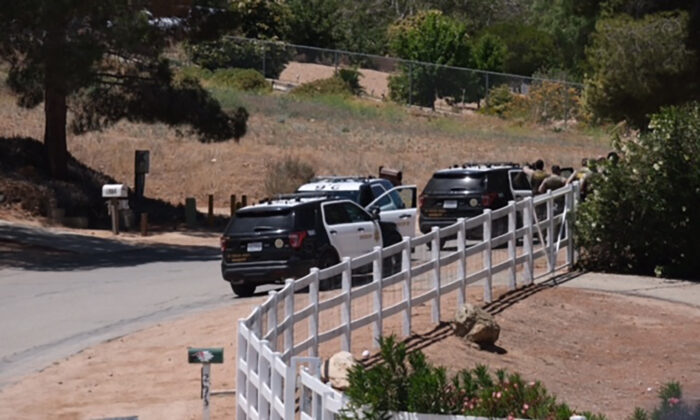 Police vehicles appear on the scene of a fire near a home in Acton, Calif., on June 1, 2021. (David Crane/The Orange County Register via AP)
Southern California

Sheriff’s deputies responded to reports of multiple gunshot victims shortly before 11 a.m. at Fire Station 81, about 45 miles north of Los Angeles, according to a statement from the county sheriff. Authorities didn’t have more details.

A home less than 10 miles east of the station is engulfed in flames, and there is a heavy police presence, but authorities didn’t immediately have more information.

Media outlets reported that a body is visible outside the burning home and may be the shooter. Helicopters have been dropping water to control the fire.

The Fire Department described it as a “tragic shooting” on Twitter, saying the agency is “still in the process of gathering additional information” and it’s cooperating with law enforcement “throughout this ongoing incident.”

Police tape surrounded the fire station in the Agua Dulce area near Santa Clarita, and police cars and ambulances lined the street outside.

Agua Dulce is a rural community of about 3,000 people in the desert of northern Los Angeles County known for its rock formations and panoramic views. It’s a dry, hilly area, and ranches with horses and other livestock break up the mountainous landscape.

Neighbors watched the black plume of smoke rising from the burning house in the nearby community of Acton. Michael May, 70, lives down the road and said he was sitting in his living room when he heard the buzz of helicopters flying low.

“Around here, that usually means a fire,” he said.

He saw dozens of deputies’ cars racing up the street. They emerged wearing bulletproof vests, he said.

May has been a resident of the community for 23 years but didn’t know who lived at the burning home. He said many people in law enforcement live in the area, as well as some in the film industry.

“It’s a place people want to go for peace and quiet,” he said.

Brian Dalrymple, 79, lives across the street from May and said he thought the burning home had been sold recently.

He and his wife went outside to see the thick smoke, initially concerned the flames might spread to their home. Dalrymple said he never heard gunshots but saw deputies rushing up to the property, long guns in hand.

He said a friend in Santa Clarita called to tell them the news.

“We didn’t know what she was talking about,” Dalrymple said. “It’s usually pretty peaceful out here.”