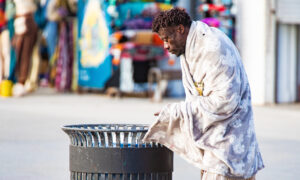 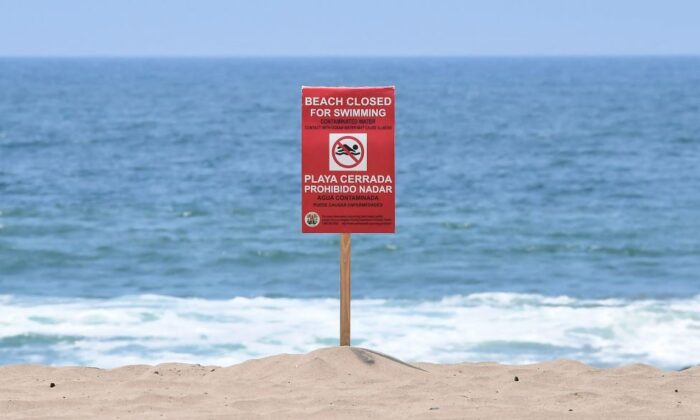 A sign indicates that the Dockweiler State Beach is closed to swimming after a sewage spill in Playa del Rey, in Los Angeles County, Calif., on July 13, 2021. (Frederic J. Brown/AFP Via Getty Images)
Southern California

The city’s Hyperion Water Reclamation Plant on July 11 discharged raw sewage into Santa Monica Bay, which Galperin called in his letter “an event that was both an environmental disaster and imminent threat to the health and safety of millions of residents in and around the city.”

The July 20 letter was addressed to LASAN director and general manager Barbara Romero.

In and of itself, the emergency action to release water from the facility to prevent water from overflowing elsewhere will likely be deemed an appropriate action to prevent a larger problem.

However, LASAN, the department responsible for the plant, failed to notify the public about the sewage release until late the next day.

LASAN “reported that the incident began on Sunday, July 11, in the afternoon, but the department’s social media accounts did not notify the public until after 5 p.m. on Monday afternoon—nearly 24 hours later,” according to the city controller’s letter.

Until then, many people would have been splashing in water contaminated by the 17 million gallons of raw sewage dumped into the bay. Raw sewage has many pathogens dangerous to human health.

The decision to send the raw sewage into Santa Monica Bay was made after debris clogged part of the water treatment facility. There was a concern the facility would be unable to continue receiving water, which would have prevented waste from flowing properly through the city’s sewage system.

Among other things, Galperin’s letter demands to know: “When did LASAN notify the relevant regulatory entities and partner agencies at the city, county, and state, including elected officials? If those notifications occurred shortly after the start of the incident, why was the public left uninformed for so long?”

He’s also calling for more information on the necessary criteria that must be met at LASAN-operated plants in order to trigger an emergency through a mass notification system. Further, Galperin questions why LASAN discharged the sewage using a one-mile outfall—which is shallower water and closer to beachgoers—rather than its five-mile outfall.

With the Los Angeles sheriff already asking for a State of Emergency to be declared because of Venice Beach’s homelessness crisis, the last thing the City of Los Angeles needs is beach closures due to untreated sewage threatening public health.

Tim Shaler
Tim Shaler is a professional investor and economist based in Southern California. He is a regular columnist for The Epoch Times, where he exclusively provides some of his original economic analysis.
TOP NEWS